George Russell believes F1 has “a lot to learn” after the inaugural Saudi Arabia Grand Prix. The Williams driver had a race to forget after he was rear ended by Haas racer Nikita Mazepin and was unable to finish as a result.

“I’m sorry, I couldn’t avoid this,” Mazepin said over the radio after the incident.

The inaugural Saudi race proved utterly chaotic, with the track being described as ‘completely nuts’ and ‘dangerous’ before the race got underway.

Russell’s crash resulted in a second red flag of the day after a dramatic start to the penultimate Grand Prix of the season.

The Briton had earlier been involved in an incident with Lance Stroll on Turn 7, which was noted by the stewards.

Contact was made between Aston Martin’s Stroll and Russell, with the Canadian being forced into the run-off area.

Russell, who has just one race remaining with Williams before joining Mercedes next season, labeled the Jeddah Corniche Circuit as a “recipe for disaster.”

Reacting to the incident that ended his race, he said: “[It was] a big impact.

“It is so difficult for all of the drivers. You come around a corner which is full-gas and suddenly there is a car sideways, there is tyre smoke everywhere, you don’t know what is about to happen.

“A lot to learn from this weekend in terms of these circuits. Incredibly exhilarating, so fast, exciting to drive from a driving perspective but lacking quite a lot from a racing perspective.

“Let’s see what happens in the future and just generally, a lot to learn I think.”

Pundits and drivers alike were wary of the quickness of the Saudi Arabia track and several dangerous corners, which Russell explains further.

“To be honest, it was much of the same through the opening laps because it was just chaos from turn three through to turn seven,” the Grand Prix Drivers’ Association director continued.

“You couldn’t see anything, cars were everywhere and again, it is a great track to drive but it is a bit of a recipe for disaster.

“A rethink is needed and if we do come back here next year, which I guess we are, I think there are some things they need to modify to make these kinks just straights.

“It is so blind and we have already seen too many incidents waiting to happen.”

Lewis Hamilton won the chaotic race to draw level on points with Max Verstappen at the top of the driver’s championship.

The final race of the season in Abu Dhabi this Sunday will be a winner-take-all affair, which driver will walk away with the F1 world title? 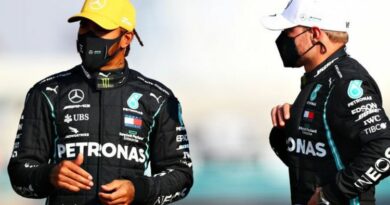