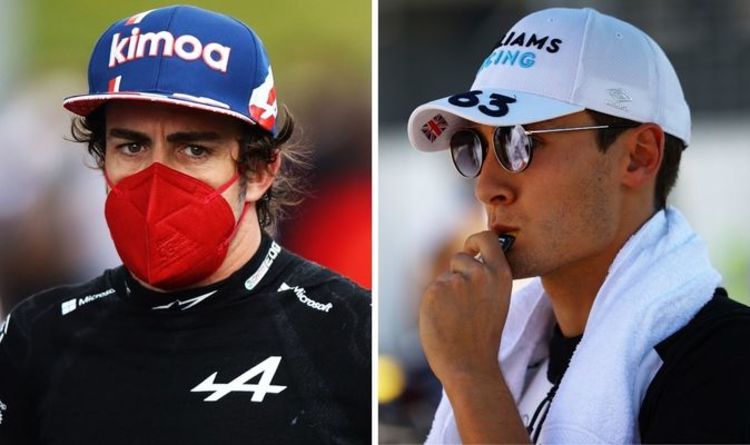 Having been involved in F1 for 20 years, winning the world title twice in that time, it’s fair to say Fernando Alonso knows his stuff. So when he declares someone to be a “future world champ”, it’s probably a statement worth listening to.

That’s what the Spaniard has said about George Russell already in the 23-year-old’s short career in the sport so far, and now he has the chance to prove the veteran racer right.

We’ve finally had official confirmation that Russell will make the step up to race for Mercedes in 2022, after managing to get some superb performances out of a Williams car that has struggled for competitiveness during the three years he has driven it.

How it has taken this long for one of the quicker teams to snap up the Briton is a mystery to Alonso.

Before he returned to F1 with Alpine, the new branding for the Renault team with which he won back-to-back championships in 2005 and 2006, Alonso gave his thoughts on who stood out from the crowd among the newer generation of drivers entering the sport.

JUST IN: Michael Schumacher’s family ‘ready to tell his story’ after accident

“George Russell is the one that surprises me every weekend,” he answered. “How he’s driving the Williams. Zero mistakes. I’m really surprised about his natural speed.

“He is putting in something special every weekend.”

Some may scoff at the idea of a man who has a grand total of 16 championship points to his name across two-and-a-half seasons being tipped as a future title winner, but his lack of tangible rewards so far in F1 is purely down to the car he drives.

With the exception of a few brief moments in exceptional circumstances – the most extreme so far being his unlikely maiden podium awarded after the Belgian Grand Prix was rained off – Russell is yet to have the opportunity to truly show what he can achieve on a race day.

The ‘Mr Saturday’ moniker he has been given may be intended as a compliment, but it’s rather harsh on someone who has the natural speed to lead the pack no matter what day of the week it is.

The 23-year-old outqualified his 2019 Williams team-mate Robert Kubica every single time across 20 races, and is yet to start lower down the grid than current partner Nicholas Latifi.

Those are the only fair comparisons for the Russell we have been able to see so far, and he has consistently proven he is faster than all those around him.

The one time so far that we’ve seen him in a race-winning car – deputising for the Covid-hit Lewis Hamilton in Mercedes’ 2020 title-winning W11 – he was set to storm to victory in Bahrain until a pit stop error and a puncture cruelly denied him his first F1 victory.

His promotion to race with the Silver Arrows full-time finally gives him more opportunities to succeed.

The 23-year-old won’t have it easy. Being the team-mate of the seven-time world champion, who may have picked up his eighth crown by the time you take up your new post next to him, might be the most difficult seat in the sport. Just ask Valtteri Bottas.

But Hamilton isn’t unbeatable. Max Verstappen is going toe-to-toe with him this season in a title race that looks set to go down to the wire, and a similarly-tight fight in 2016 was won by Hamilton’s team-mate and long-time friend Nico Rosberg.

Russell wants to win the world title, but he doesn’t want to upset a team-mate in the process. That attitude will have to change if he wants to become champion while Hamilton is still around – Bottas has been largely compliant while at the 36-year-old’s side, but that has come at the cost of the Finn never coming close to beating his fellow Silver Arrow in a title fight.

Earlier this season, Alonso swapped helmets with Russell so he could add the Briton’s to the fine collection he keeps in his home town of Oviedo in Spain.

On the one he handed over to the Norfolk racer, the Spaniard wrote: “George, you rock. Future world champ.”

How long it takes Russell to fulfil this prophecy will depend on his willingness to upset the apple cart at Mercedes while Hamilton is still there.

If he is up for doing exactly that, we could witness a tense and dramatic power struggle akin to that fight between Hamilton and Rosberg emerge once again in 2022.

Mexican GP: McLaren wary fight for fourth with Renault not over yet