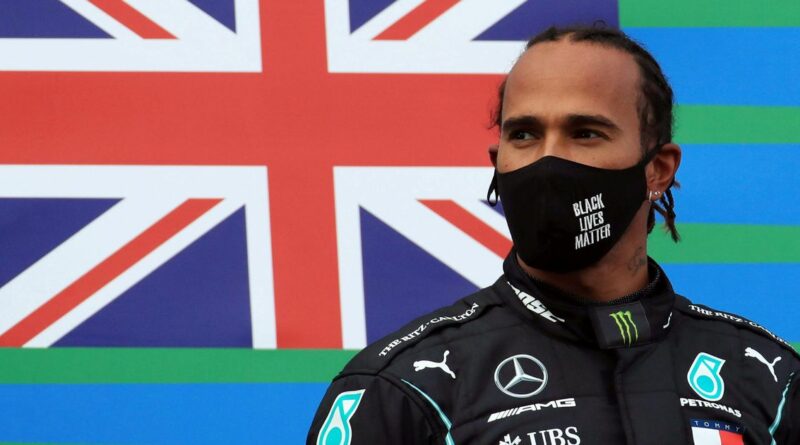 Sir Lewis Hamilton has confirmed he will join sport’s four-day social media boycott to stand against racist abuse — and criticised Formula 1’s lack of involvement to support the initiative.

Premier League football clubs will lead a virtual walkout from social media platforms such as Twitter, Instagram and Facebook from 3pm on Friday, April 30 until midnight on Tuesday, May 2 following an increase of abuse towards players and a failure from the social media companies to shut down the abuse.

And the Mercedes star confirmed on Friday he would be joining the boycott in solidarity with his fellow athletes with a post via his official Twitter account.

The impact of Hamilton’s temporary withdrawal is significant, with over 22 million users following the 36-year-old’s feed on Instagram and a further 6.3m followers on Twitter.

“To stand in solidarity with the football community, I will be going dark on my social media channels this weekend,” he wrote.

“There is no place in our society for any kind of abuse, online or not, and for too long it’s been easy for a small few to post hate from behind their screens.

“While a boycott might not solve this issue overnight, we have to call for change when needed, even when it seems like an almost impossible task.

“Sport has the power to unite us. Let’s not accept abuse as part of sport, but instead, let’s be the ones who make a difference for future generations.”

Hamilton, who currently leads the drivers standings as he aims to secure a record eighth title, has been a passionate advocate for increasing diversity in motor racing and has been at the forefront of the sport’s anti-racism messages.

But the British racer has never shied away from speaking out against the sport’s hierarchy and has hit out at the organisation again after it emerged they would remain on social media across the Portuguese Grand Prix weekend in Portimao.

Hamilton said: "I am fully supportive of the initiative and if me doing it helps put pressure on those platforms in order to help fight against it then, for sure, I am happy to do so.

"I am really proud to hear there are so many organisations getting involved. I am not sure why Formula One is not a part of that.

"But I heard Sky are for example, and as I said, I probably will follow it and support it this weekend."

F1 issued a statement on Friday morning seemingly in retaliation to Hamilton’s comments, which notably did not include a promise to follow his lead.

It read: “F1 is wholly committed to combatting any form of discrimination, online or otherwise.

“We support the actions of the Premier League and other sporting bodies and athletes in highlighting that more must be done to eradicate online abuse that they are receiving directly.

“We continue to work with all platforms and our own audiences to promote respect and positive values and put a stop to racism.”

Hamilton is not the only F1 driver to take part, with fellow British drivers Lando Norris and George Russell also pledging their support by going offline.

Formula One: Hamilton without reassuring race engineer 'Bono' for next two races