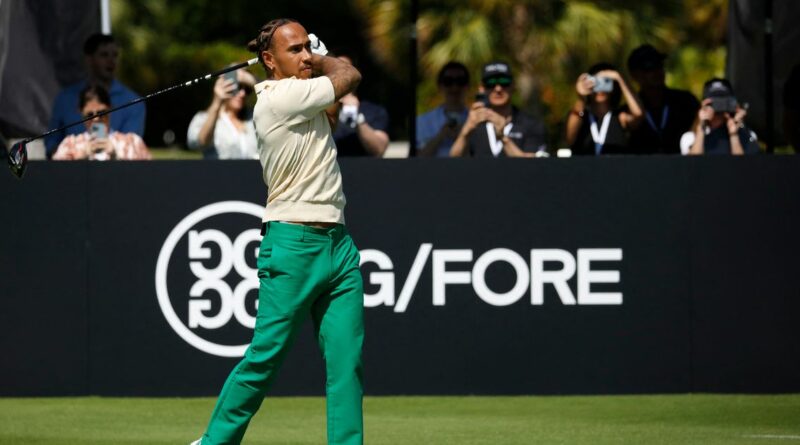 Hamilton, 37, came from humble beginnings on a Stevenage council estate, with his father Anthony working multiple jobs to fund his son's formative years in motor racing. The British driver has since gone on to become the most decorated driver in F1 history, winning more races than anyone else and taking a record-equalling number of championships.

He is also the grid's sole black driver. And on Wednesday, Hamilton teamed up with NFL star Tom Brady at a fundraising event for the city's under-privileged children at Miami Beach Golf Club.

"The youth is everything and something I am passionate about is getting children into STEM (Science, Technology, Engineering and Mathematics) subjects," said the Mercedes driver. "Sport brings people together and it saved my life. I am glad we are doing something for good."

Hamilton is gearing up for F1's maiden Miami Grand Prix, the first of two races in the United States this season, with Las Vegas joining the calendar next year. The race will take place at the Hard Rock Stadium.

A large number of A-list stars including LeBron James, David Beckham, Ryan Reynolds and Renee Zellweger are set to attend. Hamilton added: "I am so happy to be in Miami. This is the sport's first time here and the anticipation of this event has just sky-rocketed.

"Everyone is so excited but there will be a little bit of nerves because there will be so many people here and it is a new circuit." Hamilton, who is already 57 points behind championship leader Charles Leclerc following the opening four rounds, has written off his chances of competing for an eighth title this year.

The Briton finished a dismal 13th at Imola a fortnight ago in his ongoing struggle to get on top of his under-performing Mercedes machinery. Both Hamilton and team-mate George Russell were in the team's factory last week.

Mercedes boss Toto Wolff said: "It was a very difficult weekend for us in Imola. With Lewis, we didn't give him the tools or track position to show his true pace.

"Since we returned from Italy, we've learned as much from the weekend as we can and – in parallel – our learning has continued in the wind tunnel and simulations. We have found several directions for improving the car and we will be conducting experiments in Miami to correlate those simulations and hopefully confirm the development path for the coming races.:

The Austrian also vowed to help oversee an upturn in fortunes for the Silver Arrows, constructors' champions for the past eight campaigns: "The saying 'smooth seas do not make good sailors' comes to mind.

"This team has shown its resilience over many years and the difficult start to this season has lit a fire within every team member, determined to put it right."