Romain Grosjean had been sceptical about the introduction of the halo but two years on, it was a key element in saving his life.

The cockpit safety device divided opinion when it became mandatory for the 2018 season, with Lewis Hamilton among its critics.

Hamilton described the halo as the “worst-looking modification” in the sport’s history but changed his mind following a subsequent safety presentation.

However the aesthetics of the device, with its three prongs which run at approximately head height around the cockpit, continued to court criticism.

Grosjean himself had doubts but following his miraculous escape on Sunday, he said: "I wasn't for it some years ago but I think it's the greatest thing that we brought to Formula One and without it I wouldn't be able to speak to you today."

Cockpit protection reached the top of the safety agenda in Formula One five years ago following a series of deaths from head trauma.

Justin Wilson was killed by a flying nose cone, Dan Wheldon died after his helmet hit a safety fencing post and F1 ace Jules Bianchi passed away after a collision with the underside of a rescue tractor.

Several prototypes were tried and tested but ultimately it was the halo designed by Mercedes which was given the green light. The titanium device sits above the driver's head and can withstand the weight of a double-decker bus.

It is designed to prevent a driver from sustaining serious head injuries and is understood to have taken the impact when Grosjean smashed into the barriers in Bahrain.

The Frenchman was also protected by a new specification of fireproof overalls introduced this year which keep drivers safe for longer.

On Monday, it emerged that Grosjean's helmet visor melted as he sat in the burning wreckage of his car following his horrifying crash.

F1 medic Ian Roberts – who was one of the first doctors on the scene – revealed: "He was very shaky and his visor was completely opaque and melted.

"I had to get his helmet off just to check everything was okay." 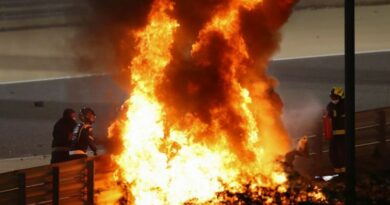 Formula One: Disappointment at cancellation of Singapore GP but many also understand 'safety first' rationale