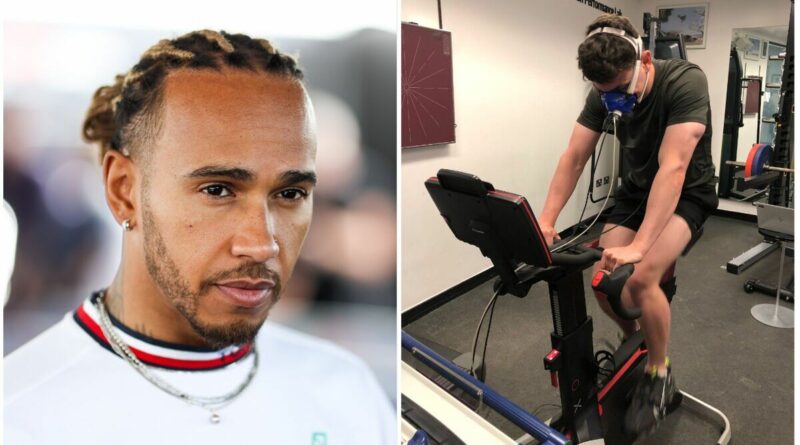 Lewis Hamilton and the rest of F1’s star-studded grid are commonly thought of as drivers first and foremost, but that couldn’t be further from the truth. On good authority from the brains at Porsche Human Performance (PHP), possessing the seven-time world champion’s driving talent would only be enough to grind out several laps of a Grand Prix before the average person’s neck would give way. And that’s before taking the rigours of a 45-degree cockpit into consideration.

F1 drivers are not just superb athletes with mesmerising car control and elite reflexes, but individuals that can use those skills in the midst of a sweltering test of endurance. Flying the flag for Express Sport and Average Joe, I went to Silverstone to find out how hard the world’s 20 best drivers have to work for their pay packet.

Put through my paces by PHP’s Jack Wilson in a gym which has hosted the likes of Daniel Ricciardo and Yuki Tsunoda, a key area of focus was the way in which F1 stars must prepare their neck for a season of intense G-force. And that’s not just to cope with high-speed cornering, acceleration and breaking, but also the darker proposition of ‘training to crash’.

Drivers regularly experience 6G during races, roughly twice as much strain as Wilson allowed me to experience, which on its own was enough to make looking backwards a painful affair for the week following. It’s therefore unsurprising that, while you or I may dread leg day, F1 stars must regularly gear themselves up for ‘neck day’ so that a two-hour race can come and go with their head still firmly attached to their shoulders.

The ability to cope with far greater pressures than your Average Joe comes in handy not just for when things are going to plan, but also for when they’re not. Max Verstappen’s crash at Silverstone in 2021 after colliding with Hamilton sent him careering into the wall in a monumental 51G shunt. The Dutchman was sent to hospital for precautionary checks, but things could have been far more serious if his specialised training regime did not encompass preparing for the worst. 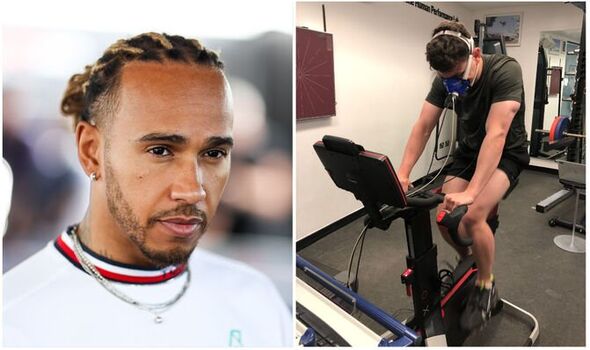 Zipping around the world’s finest circuits at high speed also requires F1 drivers to be adept at clinging on for dear life. Despite tipping the scales at least 5kg heavier and the tape measure 4 inches taller than Hamilton, my grip strength score of 45 is some way short of the 55 needed to keep hold of the steering wheel when the going gets tough.

The Mercedes star would also be expected to churn out a score of around 60 in a VO2 Max Test, which analyses how efficiently your body uses oxygen when at full tilt. That’s a similar result to one expected of a Premier League footballer, and far more than the 43 achieved by Express Sport’s exhausted representative.

Grip strength, neck strength and elite cardiovascular endurance must also be accompanied by mind-blowing reflexes, roughly 50 per cent quicker than my best effort on the reaction wall despite the PHP brigade cheering me on. All these skills must be maintained along with a physical composition that’s tough to maintain throughout a demanding season, particularly for Hamilton’s 6ft 1in team-mate George Russell.

“For elite drivers, you’d expect body fat percentages in the realm of 8-12 per cent,” Harris told Express Sport. “But taller drivers such as George Russell or Esteban Ocon, they may need to be even leaner to stay as light as some of their shorter competitors. Then you’re really straddling the boundaries of what is a healthy or unhealthy body fat percentage. If it gets too low, issues on reproductive and immune health can crop up.”

Keeping up with motorsport’s most talented stars also requires exceptional mental strength. Hamilton recently discussed the need to grit his teeth in Baku as crippling back pain put his race in jeopardy, but more common hurdles for drivers to overcome surround heat and hydration.

Since the turn of the millennium, Grand Prix air temperatures in Australia, Brazil and Bahrain have pushed or exceeded 40 degrees Celsius, with the cockpit considerably hotter than that. To gain some idea of what that’s like, I was ushered into a 45 degree heat chamber for 10 minutes of light exercise, which felt like getting into a car on a scorching day with the heaters on full blast.

To stay prepared, drivers regularly suffer through hour-long sessions, and are effectively subjected to the same heat while wearing fireproof overalls on any given race weekend. As such, the science behind staying in top form while battling through such extreme conditions is becoming an important consideration for F1 teams, and experts like Chris Harris of Precision Fuel & Hydration now have a pivotal role to play.

“Lewis has been reported as saying that he doesn’t drink at all during races,” he explained. “Dehydration affecting that side of the performance can reduce sodium concentration in the blood, affect muscle contractions and stop your brain telling your muscles how to work. Some drivers are well-trained to perform dehydrated and some aren’t, but it’s something everyone wants to avoid.

“Any lapse in concentration can cause horrendous injuries for F1 drivers and it can lose them races. Brain function is governed enormously by fluid, and it’s the number one thing to keep on top of to keep the body functioning. Dehydration can kill you in hours.”

Precision Fuel & Hydration offer such unusual services as detailed sweat tests, which yield personalised hydration plans for each individual driver. F1 has always been a sport of exploiting marginal gains, and that goes not only for the machines beneath the drivers, but also for the drivers themselves.

Such services also highlight the extent that competing in F1 is not only a test of driving skill, but also one of athletic ability and mental resilience. Before hydration was properly taken into account, Harris points out that dehydrated drivers had urinated blood after getting out of the car – the kind of stories a casual sports fan may only have attributed to marathon runners or long-distance cyclists.

Nine-time Grand Prix winner Mark Webber told Precision Fuel & Hydration that the field are taking better care of themselves in 2022, and things have been looking up since he first broke into the sport. “[The attitude] is better these days,” claimed the former Red Bull star. “Drivers understand that they need to be better prepared. When I started, everyone was laughing at me bringing a bath to certain races because of pre-cooling. Now a lot of people are doing it because they can see the rewards of it.”

Jetting around the globe to go wheel-to-wheel in scintillatingly fast cars comes across as a glamorous lifestyle, but it’s also gruelling business. Not only do drivers graft in the gym to go faster on the circuit, but also to cope with losing buckets of sweat in the heat of battle and the off-chance of a brutal crash. And my test results are a testament to the fact that they can do all of those things on a totally different level compared to your Average Joe – food for thought ahead of Hamilton and Co’s next outing at Silverstone.

Ecclestone could be BANNED from F1 races after comments on racism 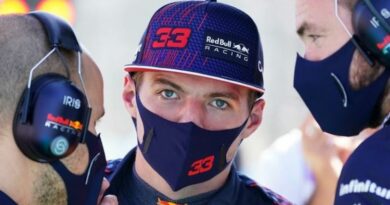