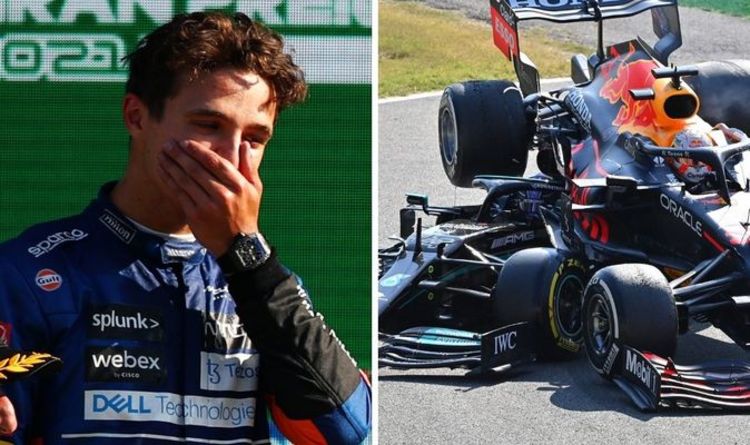 Lando Norris was worried he might suffer the same fate as stars Lewis Hamilton and Max Verstappen, who took each other out as they fought hard for points at Sunday’s Italian Grand Prix. The F1 title rivals crashed at Monza’s infamous chicane at the end of the pit straight, with the Briton narrowly avoiding a disastrous outcome as Verstappen’s car flipped up off a kerb and came to rest on top of his, with only his halo preventing the back wheel from hitting his head.

The crash left the race wide open for McLaren, who had qualified second and third on the grid after Valtteri Bottas’ grid penalty for a change of power unit, to win their first race since Interlagos in 2012.

Not only did they do that courtesy of a flawless drive from Daniel Ricciardo, but 21-year-old team-mate crossed the line second to secure an incredible one-two – the first time any team has managed the feat this season.

Norris admitted after the race he had considered going all out to pip his fellow McLaren star to the chequered flag, but the crash between Verstappen and Hamilton earlier in the race had made him wary of what could happen if things got too heated.

He said: “I don’t know why but I had a few flashes of seeing the incident between Max and Lewis, because I saw it quite well in my mirrors.

“I would have loved to go for the win, but our first and second, I think I’m just as happy with. The feeling I get for the team is priority over my own feeling in a way.”

Norris had asked the question of his team during the race, as he accused Ricciardo of racing too slowly and hinting he should be allowed to pass.

But in the end the Australian came home first to secure his first Grand Prix win since Monaco in 2018.

Norris said he was delighted for what the team had achieved at Monza, but said he would like to be the one pushing for a race win in the future.

“It’s incredible,” the Briton said. “The main thing it means for me is our result as a team. Whether I’m second, third or first, I think the best thing is just having that one-two for the team, securing the maximum points and it’s just such a cool feeling to be part of this.

“I’m happy for myself to be here again, and for us to have executed the race the way we did with the overtakes and the strategy and the defending. And happy for Daniel and the whole team because it’s a pretty awesome achievement for all of us.

“I’m here for many more years I hope, especially with McLaren and the whole team, so I feel like I still have an opportunity in the future to try and go for it. But in this moment and instance, I was happy just staying where I was.”