Lewis Hamilton and Nico Rosberg famously descended from close friends to bitter enemies during their time as Mercedes F1 teammates.

The pair had been best pals during their youth, competing against each other on the kart track and holidaying together off it. But their relationship deteriorated after they were paired together in Formula 1 with the Silver Arrows. Their first year together in 2013, when Mercedes was still in a rebuilding phase, was cordial enough, but once it became apparent that the team was going to be the class of the field in 2014 following the switch to hybrid engines, their friendship quickly evaporated.

The pair clashed on and off-track as they fought for the F1 title in 2014, 2015 and 2016. Hamilton pinched the championship at the final race in 2014 before winning comfortably in 2015. Rosberg finally triumphed in 2016 after another final-race showdown before promptly retiring, citing the mental fatigue caused by his battle with Hamilton as a factor.

The pair were barely on speaking terms towards the end of their spell as teammates, but relations have thawed in the subsequent years, even if they’re not back to being best friends. Hamilton and Rosberg both reside in Monaco and during the recent Grand Prix in the principality, the German revealed they bumped into each other.

Following a Sky Sports segment, which included Hamilton explaining how spending time with the Rosberg family as a youngster inspired him to want to live in Monaco, Rosberg told presenter Natalie Pinkham: “We live in the same building in Monaco and shared the lift this morning. I was with my two daughters going to the trampoline at the pool and he was going to the racetrack.”

Is Lewis Hamilton vs Nico Rosberg the best rivalry in Formula 1? Have your say in the comments section below.

Alluding to their stormy rivalry, Pinkham said: “You can’t let racing get in the way of that friendship.”

Rosberg replied: “The problem is, when you’re the only rivals competing against each other for race wins and the championship within the same team, it doesn’t get more difficult than that. The dream of being a world champion is just that much greater than sometimes a friendship.”

When Pinkham jokingly offered to be a friendship therapist for the pair, Rosberg said: “We’re all good, we’re fine, all good.” 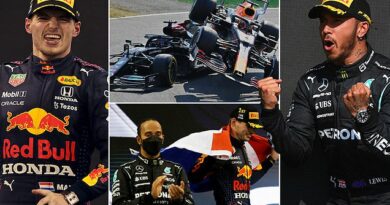 TALE OF THE TAPE: Hamilton vs Verstappen – who comes out on top?