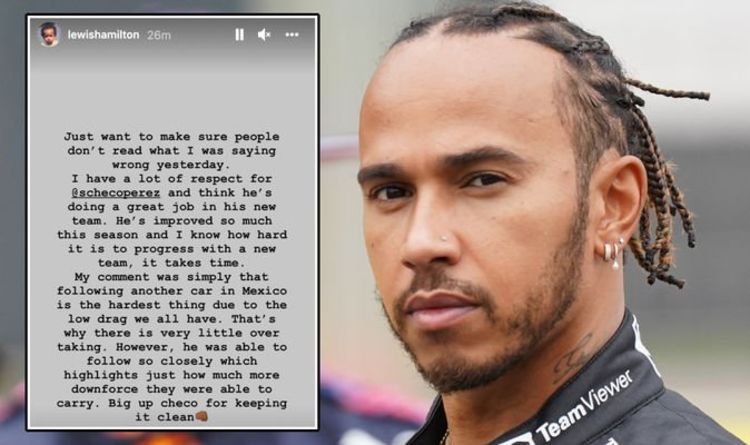 Lewis Hamilton has clarified his comments about Sergio Perez following claims he took a dig at the Red Bull driver after Sunday’s Mexico Grand Prix. The Briton held off Perez to finish ahead of him in central America, but could only muster second-place as Max Verstappen stormed to victory.

The result meant Hamilton fell further behind Verstappen in the Formula One Drivers’ Championship and faces an uphill battle to win a record eighth title.

In the aftermath of the race, Hamilton remarked on the pace of the Red Bull cars, but appeared to dismiss Perez’s abilities.

“Jeez, their pace – it was just unbelievable today,” the Mercedes driver told Sky.

“And there was nothing I could do to battle that. And when you’ve got Checo [Perez] on your tail, then you know the car is quick.”

JUST IN: Mercedes boss Wolff ‘will not be happy’ with Bottas in Mexico

Some fans felt that Hamilton was suggesting the Mexican driver isn’t good enough to be competing with him.

But Hamilton took to Instagram on Monday to reveal he was actually commenting on the difficulty of following a car so closely.

“Just want to make sure people don’t read what I was saying wrong yesterday,” Hamilton wrote.

“I have a lot of respect for @schecoperez and think he’s doing a great job in his new team.

“He’s improved so much this season and I know how hard it is to progress with a new team, it takes time.

“My comment was simply that following another car in Mexico is the hardest thing due to the low drag we all have. That’s why there is very little overtaking.

“However, he was able to follow so closely which highlights just how much more downforce they were able to carry.

“Big up Checo for keeping it clean.”

But the Mercedes drivers were unable to hold off Verstappen, who overtook the duo on the first turn after starting in third.

Hamilton remained in second place as Bottas spun out after being tipped by McLaren’s Daniel Ricciardo. The Finnish driver later rejoined at the back of the field.

Perez took a temporary lead later in the race as he decided to pit after Hamilton and Verstappen.

When the Mexican did eventually change his tyres, he exited the pits nine seconds behind Hamilton, but reduced his deficit to just one second with 11 laps remaining.

Hamilton did manage to hold off Perez but finished a long way behind Verstappen, who won the Mexico GP for the third time in his career.

And Hamilton will be disappointed with his finish as Verstappen is now 19 points ahead of his rival in the overall standings with just four races of the season remaining. 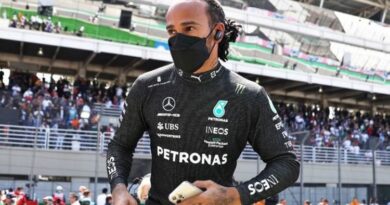 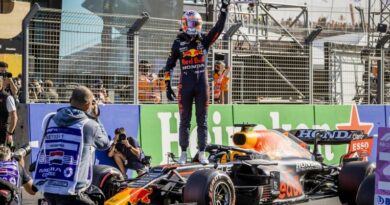 Formula One: Verstappen takes Dutch GP pole with Hamilton alongside