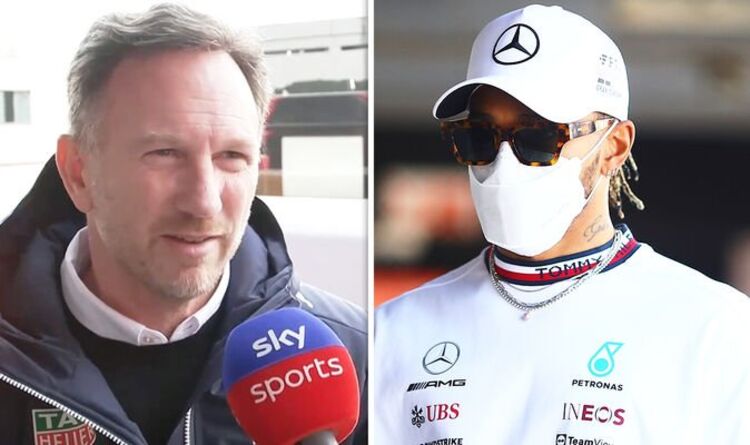 Red Bull team principal Christian Horner has joked Lewis Hamilton could receive a “big fine” if his spying mission goes too far. Hamilton took his time to look at all his rivals’ cars on the first day of testing in Barcelona on Wednesday. However, the Mercedes star took particular attention to the car last year’s champion Max Verstappen will be driving in 2022.

Verstappen’s car has been armed with aggressive sidepods as Red Bull aim to retrieve as much downforce as they can following a regulation change over the winter.

So Hamilton was keen to inspect what his likely direct rival will be competing in this season.

But Horner said the 37-year-old better keep his hands away.

“I haven’t seen that, but if he touched it he’s up for a big fine, as Max knows,” Horner told Sky Sports F1.

“There’s always a lot of interest this time of year, especially as this is the biggest regulation change we’ve had in probably 40 years.

“Looking at how these rules have been interpreted, even though they’re fairly prescriptive, you know, the solutions that the 10 teams have are all quite varying.”

Horner was referring to an incident at the Brazil Grand Prix last November.

Footage showed Verstappen looking and appearing to touch the rear wing of Hamilton’s Mercedes after qualifying.

The 2022 season begins in Bahrain in just over three weeks’ time.

Horner is hopeful Verstappen and Hamilton will reignite their rivalry on the track again this year.

But he doesn’t expect them to be the only two to have a say in the destination of this year’s world championship.

“It’s what everybody wants to see; you want to see the best drivers in the world fighting wheel-to-wheel,” Horner continued.

“I think Ferrari could be in there, McLaren [are] looking strong, so you might have a few other candidates. And don’t forget [Mercedes driver] George Russell.

“I mean, he’s gonna be a key component in this championship as well.”

On pre-season testing, Horner added: “It’s great to be back on track. These new cars are very, very different, so it’s a ‘get-to-know-you’ process with this new car.

“So far, the feedback’s been good. It’s behaving as we expected, as per our tools predicted, so it’s been an encouraging start.” 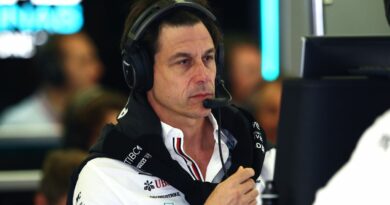