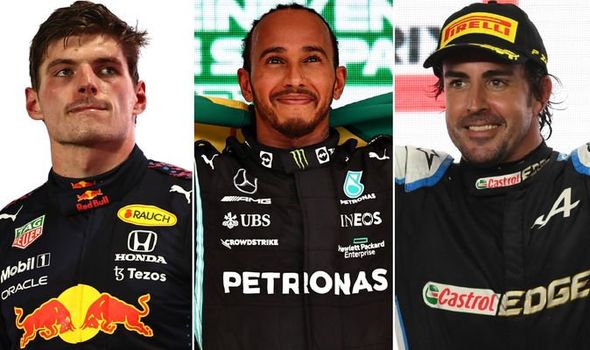 Express Sport readers are heavily backing Lewis Hamilton to beat Max Verstappen to this year’s Formula One Drivers’ Championship heading into the final two races of the season. The momentum is with Mercedes and Hamilton heading into the inaugural Saudi Arabian Grand Prix a week on Sunday.

Wins in Brazil and Qatar sealed the first back-to-back victories of 2021 for Hamilton, who was rapid across both weekends as he mounts a fightback in the championship.

And while Red Bull’s Verstappen clinched the fastest lap point in Doha, the Dutchman only leads the standings by eight points ahead of the last two races.

That sets up a possibility of the two drivers heading into the season-ending Abu Dhabi Grand Prix exactly level on points if Hamilton wins in Saudi Arabia, clinches the fastest lap and Verstappen comes second.

That would put both seven-time world champion Hamilton and Verstappen on 369.5 points heading to the Yas Marina Circuit on December 12.

Alternatively, Verstappen can be crowned world champion for the first time in his career in Jeddah and can do so if he wins the race, takes the fastest lap and Hamilton finishes sixth or lower.

But in the latest results of our poll so far, which has still yet to close, a huge 75.5 per cent of our readers are tipping Hamilton to beat Verstappen to the crown.

The 36-year-old, who has clinched his 100th pole position and 100th race win already this season, is looking to overtake Michael Schumacher and become the only driver ever to lift aloft eight titles.

And 78.2 per cent of Express Sport readers are expecting Hamilton to pick up more points than Verstappen in the final two races of the season.

Hamilton has outscored Verstappen 50 points to 39 in the past two events with the Mercedes man cutting into a gap that looked set to take the 24-year-old to glory given Red Bull’s superior package across the year.

By contrast, 20.8 per cent of readers think Verstappen will pick up more points in Saudi Arabia and Abu Dhabi while 0.4 per cent think Sergio Perez will take more points than either his team-mate or Hamilton.

Fernando Alonso meanwhile has been hailed as the driver of the day for the Qatar Grand Prix after his first F1 podium in seven years.

The Spaniard was third for Alpine, where he started after a pre-race grid-place penalty for Verstappen, having gone 104 races since his last podium in July 2014.

Almost half our readership – 47.6 – have named the two-time world champion the standout performer in Qatar, though more votes could yet change the balance.

Just behind him is pole-sitter Hamilton who has received 39.6 per cent of the votes so far with Verstappen third in the driver of the day voting on 6.5 per cent.

Red Bull’s Perez, who ended fourth, receives 1.9 per cent while Mercedes’ Valtteri Bottas took one per cent of the votes despite suffering a sluggish start and then later a DNF due to tyre failure.

Agree or disagree with the way the voting’s going? Our poll is still open and you can cast your verdict below.

Sebastian Vettel: How much do you know about his time at Ferrari?