Lewis Hamilton was booed by fans in attendance at the Hungarian Grand Prix after he secured pole position ahead of Valtteri Bottas and Lewis Hamilton. The F1 world champion hit out at the crowd and said it would fuel him to win tomorrow.

Johnny Herbert conducted the interview with Hamilton after speaking to Verstappen and Bottas and tried to get the fans to calm down.

Hamilton had crawled around his out lap ahead of Verstappen and Sergio Perez who didn’t make it across the line for his final flying lap.

The 36-year-old was half a second clear after his first effort in Q3 with no drivers going much better on their final run.

Hamilton was not worried about fans booing though and said he has never felt so great.

Hamilton said: “It was an amazing qualifying lap and it has been amazing teamwork from everyone, Valtteri included, trying to push the car forward.

“They guys at the factory have not left any stone unturned. I’ve never felt so great with the booing [from the fans], I don’t mind it.

“The soft tyre is worth something like five metres into turn one, it was surprising to see everyone in the top 10 on the softs apart from us.

“I hope the weather is good for everyone, enjoy the sun and say safe.”

Hamilton will be keen to get a victory tomorrow and go into the F1 summer break in the lead of the Drivers’ Championship.

The Briton is looking to win his eighth world title and move clear of the legendary Michael Schumacher.

Mercedes team-mate Bottas will be alongside him giving him a rear gunner ahead of both Red Bulls on the second row.

Pierre Gasly and Lando Norris are on row three with Charles Leclerc and Esteban Ocon behind them.

Two former world champions in Fernando Alonso and Sebastian Vettel round out the top 10. 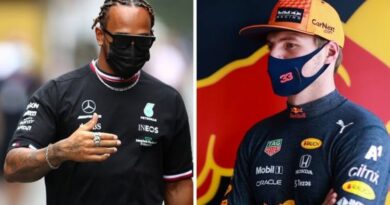 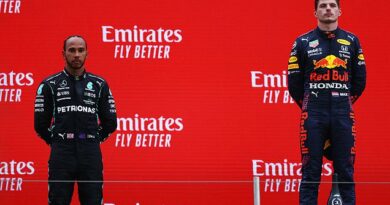 'This one's on us': Mercedes issue grovelling apology to Hamilton