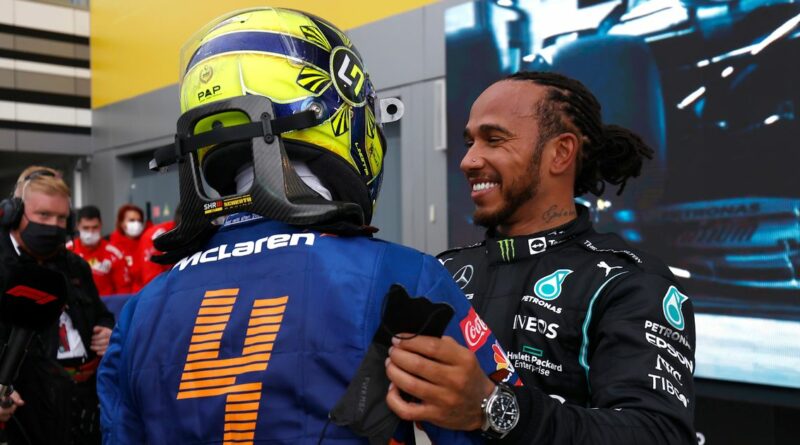 Lewis Hamilton has heaped praise upon fellow British F1 star Lando Norris after their enthralling tussle for the race win at the Russian Grand Prix on Sunday.

The McLaren ace looked set to claim the first P1 of his fledgling career in the sport in Sochi, after qualifying on pole and leading for much of the race.

But a gut decision backfired as the 21-year-old saw his name up in lights with only a few laps to go, and made the call to stick with his slick tyres despite the wave of rain which had swept in off the Black Sea.

While most others had pitted for intermediates, Sky Sports commentators described it as "Bambi on ice" for Norris who had to crawl around corners with no grip whatsoever.

Hamilton, who had stopped for fresh rubber at the behest of race engineer Pete Bonnington, ended up flying past the heartbroken McLaren racer as his car spun off the track, before going on to claim his 100th F1 race victory.

After the win, the seven-time world champion took the time to praise Norris.

"Lando did such an amazing job, he had incredible pace," he said.

"He's doing such a great job for McLaren and it was obviously very bittersweet to see my old team ahead. They're doing so well, obviously they won the last race.

"Obviously the team made a great call right at the end. I didn’t want to let Lando go, and of course I didn’t know what the weather was doing."

Hamilton also admitted it "would have been tough to have got past Lando" without the rain causing havoc, such was the McLaren ace's pace on the day.

Norris' misjudgement in Sochi cost McLaren what would have been surprise back-to-back race wins for the papaya cars, after Daniel Ricciardo's success in Monza two weeks prior.

The Australian chose to change to intermediate tyres in Russia and finished fourth, while Norris eventually came home in seventh after crawling to the pits, and took an extra championship point for recording the fastest lap of the race.

Meanwhile, despite starting at the very back of the grid due to a penalty incurred by a power unit change, Max Verstappen managed to climb up to second to ensure Hamilton did not open up a big gap in the title race.

The Briton leapfrogged the Red Bull racer in the standings, but the gap at the top is just two points with seven races to go. 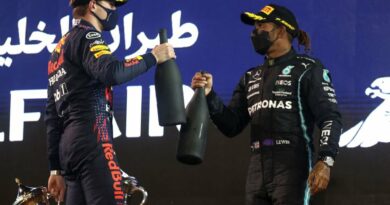 F1 star Lewis Hamilton tells fans 'he hasn't given up'