F1 commentator Martin Brundle has warned Lewis Hamilton to avoid any unnecessary manoeuvres that cause risk and gift Max Verstappen the world championship at this weekend’s Saudi Arabian Grand Prix. The 2021 F1 season has been one of the greatest years in the sport’s modern history thanks to the enthralling title battle between Mercedes’ Hamilton and Red Bull’s Verstappen.

Hamilton is a seven-time world champion but is perhaps embroiled in his most difficult challenge to date as Verstappen threatens to ensure the title goes to another driver for the first time since 2016 – when Mercedes teammate Nico Rosberg beat the Brit to the championship.

The Brit took successive wins in Brazil and Qatar to narrow Verstappen’s lead from 19 points to just eight with 52 still up for grabs at the remaining two rounds of the season in Saudi Arabia and Abu Dhabi.

And former driver and Sky Sports F1 reporter Brundle believes Hamilton may just be the championship favourite heading into the final two races, but he emphasised that he can’t afford any last-gasp slip ups or it’s game over.

JUST IN: Who ‘dumped’ Lando Norris – ‘I’ve got a broken heart’

“He used to do that after the summer break, and I think he’s done the same again probably a little bit later in the day.

“All of a sudden, you wonder if he’s not now the favourite for the championship with this kind of momentum – but it only needs some kind of trip up: reliability, contact, puncture, whatever, and Max can take the title next weekend.

“[He] probably won’t, but could. It’s that finely balanced and I think the ebb and flow of the season is what Red Bull will be very much hoping hoping for.”

Brundle believes that while the track appears to favour the straight-line speed of Mercedes, the unpredictable nature of the season could benefit Red Bull.

“The whole year has been quite cyclical and I think [Red Bull are] obviously hoping it’ll bounce back their way,” said the 62-year-old.

“I mean, they dominated in Mexico City, they could have won that any which way, and then obviously Mercedes went to Brazil with the fresh internal combustion engine.

“It always looked like a Mercedes track in Qatar – and then it’s all turned around in a hurry. I think most people think that Saudi Arabia just looks like a massively fast track between two walls. You would think that plays into the hands of Mercedes.”

Heading into the final stages of the season, Hamilton is now just eight points behind Max Verstappen in the championship standings.

Brundle admitted the pundits at Sky F1 are thoroughly enjoying the battle between the two titans, serving up a classic case of the young pretender taking on the championship veteran.

“They’re going about it in an intensely competitive way,” Brundle added.

“Lewis doesn’t want to step away from being the king and Max wants his crown.

“It is intense. It’s personal. There’s a lot of money involved, a lot of global glory and awareness.”

In the constructors’ championship, Mercedes still have an advantage by five points, despite Valtteri Bottas’ retirement in Qatar. 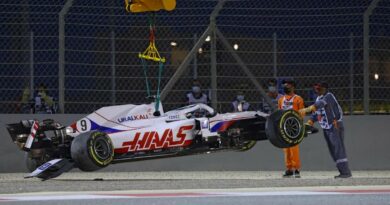 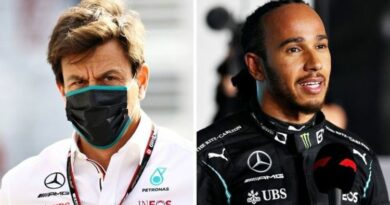