Lewis Hamilton’s father Anthony has revealed the sadness he felt that Michael Schumacher was not able to witness his son matching the German’s F1 win record. Mercedes driver Hamilton collected a record-equalling 91st race win at the Eifel Grand Prix in Germany on Sunday.

Following the win, Schumacher’s son Mick presented Hamilton with one of his dad’s old helmets.

Hamilton senior admitted his honour at seeing his son receive the gift from F2 driver Mick.

However, he would have loved his father to have been well enough to be present for the historic moment.

“While it was an exciting day and certainly an honour to receive that from Mick Schumacher, it’s also tinged with a bit of sadness because Michael’s not here,” Hamilton told Sky Sports News. 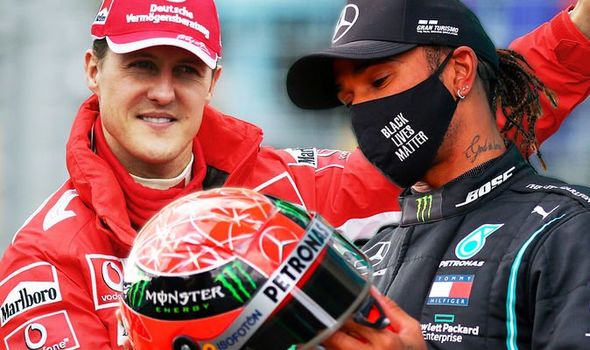 “As Lewis said yesterday, we spent a long time watching Michael race and we looked up to him immensely.

“It would have been nice for him to be there but we wish him all the best.”

F1 legend Schumacher continues to recover from a horrific skiing accident in 2013.

Hamilton junior revealed his admiration for the 51-year-old after the race and was almost left speechless after receiving the helmet from Mick.

He said: “Wow, I’m really, really honoured man. Thank you so much, I really appreciate that thank you.

“I don’t even know what to say! I mean, when you grow up watching someone, you genuinely idolise them in terms of the quality of the driver they are and what they’re able to continuously do, year on year and race on race, week on week with their team.

“I remember playing as Michael on the game, Grand Prix 2 I think it was.

“Seeing his dominance for so long, I don’t think anyone – and especially me – could imagine that I’d be anywhere near Michael in terms of records. It’s an incredible honour. 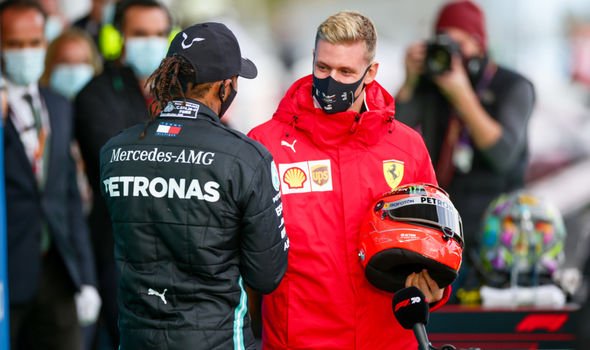 “It’s going to take some time to get used to. As I came in the pit lane, that’s only when I realised I’d equalled it.

“I hadn’t even computed it once I’d crossed the line. I couldn’t have done it without this incredible team, everyone continuing to push behind me and giving me their everything. A big, big thank you and huge respect for Michael.”

Meanwhile, Hamilton’s dad Anthony said a large part of his son’s success was down to his go-karting days as a young boy.

“I was thinking back on it this morning actually, it’s 30 years we’ve been on the road to motorsport success,” he added.

“Lewis’ early formative years were probably the most influential and most important in his achievements to date.

“And to be honest, nothing has changed other than Lewis’ older, I’m older and he’s got a huge list of successes.

“But we treat every day and every race as if it were our first race, and it’s so exciting.

“I think that’s part of the reason why he’s still achieving greatness because he’s enjoying every day that he can race.”

Jones picks in-form Slade and Joseph in centres for Italy clash
We and our partners use cookies on this site to improve our service, perform analytics, personalize advertising, measure advertising performance, and remember website preferences.Ok