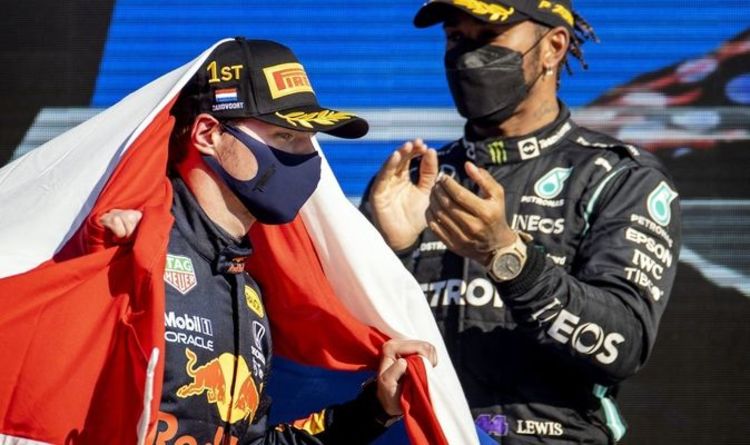 Jacques Villeneuve believes Red Bull’s Max Verstappen is the firm favourite for the title this season, claiming Lewis Hamilton has had “an easy life” ever since former Mercedes team-mate Nico Rosberg retired in 2016.

Hamilton and Verstappen have been tangled in one of the fiercest Formula One title battles in history, with the championship ebbing and flowing between the pair all season.

Yet tensions boiled over at the Italian Grand Prix as the pair spectacularly crashed for a second time this season, with the two title protagonists left beached in the gravel.

Verstappen was subsequently handed a three-place grid drop to be taken at the Russian Grand Prix, however, Villeneuve believes the 23-year-old has shown enough this season to convince him who should be champion.

JUST IN:
F1 chief explains Hamilton and Verstappen will respond in Russia

”Verstappen is superior. He doesn’t make any real mistakes,” stated the 1997 world champion, speaking to Corriere.it.

“He always goes on the attack, and that shows weaknesses with Lewis. And Mercedes makes mistakes too, more than Red Bull.

“After Rosberg, Lewis has had an easy life. Maybe he fell asleep a bit, but this year he has suddenly woken up. He remains a phenomenon though.”

The pair first collided at Silverstone with a huge fallout between Red Bull and Mercedes, however, this time both teams seemed to have a more muted response to who was at fault.

Neither Hamilton nor Verstappen however took any blame for the incident, which saw the Dutchman deemed more at fault for the crash.

Speaking of the rivalry, Villeneuve believes there’s no reason they should put a stop to proceedings.

”No, because it is a fight and they are the gladiators,” added Villeneuve. “They are not too aggressive, they just want to finish ahead of the other. We don’t see really bad things happening yet.”

Many have likened the rivalry to that of Ayrton Senna and Alain Prost, which was at it’s most intense when they were team-mates at McLaren-Honda in the 1988 and the 1989 seasons, but Villeneuve dismissed the comparison.

“That rivalry really went beyond all limits,” concluded the Canadian. “There was real hatred and the will to play dirty.

“There is no such thing between Lewis and Max – I hope to see more duels between them, without them ending up in the wall. That’s going to happen one day though.”