Martin Brundle has taken a swipe at the bodyguard who stopped him interviewing Megan Thee Stallion before the US Grand Prix. The Sky Sports commentator was back doing his famous pre-race grid walk, parading up and down the track on the hunt for interviews with drivers or celebrity guests.

However, things didn’t go to plan as Brundle, 62, was snubbed by both the rapper and tennis legend Serena Williams, before finally finding a willing talker in golf star Rory Mcllroy.

His attempt at talk-time with the musician, real name Megan Pete, was particularly cringe-worthy, approaching her live on camera before saying: “Megan Thee Stallion, you’re a freestyle rapper. Have you got any rap for us today on Formula 1?”

“No rap today,” came the reply, which spurred Brundle on to then ask, perhaps more sensibly, “Who are you supporting in the race?”

At that point one of her bodyguards, clearly unimpressed by Brundle’s antics, stepped in to tell the ex-F1 driver he couldn’t ask questions.

JUST IN: Daniel Ricciardo ‘happy to be dirty’ as McLaren driver hits back at Ferrari’s Carlos Sainz

Brundle retorted “I can do that, because I just did,” before sarcastically telling viewers how nice it was that the rapper was happy to talk to him.

Ironically, this was Brundle’s first grid walk for two years due to restrictions imposed by the Covid-19 pandemic, but on Monday he laughed off the furore around the incident, although did label the bodyguard in question a ‘Malfoy lookalike’, in reference to the Draco Malfoy character in Harry Potter.

“I did chuckle on Monday,” he wrote in his column for the Sky Sports website.

“After all the blood, sweat, tears and broken bones, the glorious victories and dismal failures, the monstrous crashes, the quadruple stints on a treacherous rainy night in Le Mans, guiding a 1250 bhp flying bedsted through Monaco qualifying, along with 25 years of broadcasting, I’ve finally become mildly well known for being ignored by celebrities whilst simultaneously being swatted to one side by a man mountain and told off by a Malfoy lookalike doubtless attending his first F1 race.”

DON’T MISS:
Martin Brundle endures very awkward exchange with Serena Williams during US GP grid walk
Sergio Perez opens up on US GP near disaster after running out of water on lap one
Max Verstappen explains Lewis Hamilton incident at US GP after calling Brit ‘stupid idiot’

Brundle did concede his actions were ‘cheeky’, but also joked he could boast a bigger reason to be famous than his spats at the Circuit of Americas

“My gridwalk return after two years was probably a bit too cheeky in Austin but nonetheless a lot of fun. Actually, my real claim to fame is that I once played snooker with Mark Knopfler, and what a lovely bloke he was too.”

The previous day however Brundle, who also worked for ITV Sport and the BBC before joining Sky in 2012, had been less jovial when asking for more respect from VIP guests attending races for the first time.

“I have felt under pressure on the grid before but by people called Senna, Prost, Schumacher, Mansell, Piquet and so on,” he tweeted.

“Bodyguards visiting the grid for the first time don’t bother me, everyone’s got a job to do, but they could maybe learn some manners and respect on our patch.”

In the race itself Brundle, who drove for the likes of Benetton, Williams and McLaren during his F1 career, watched Max Verstappen beat Lewis Hamilton to the chequered flag. 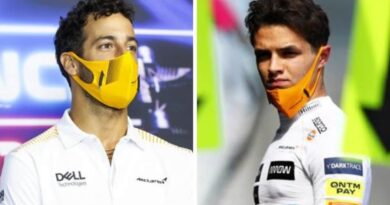