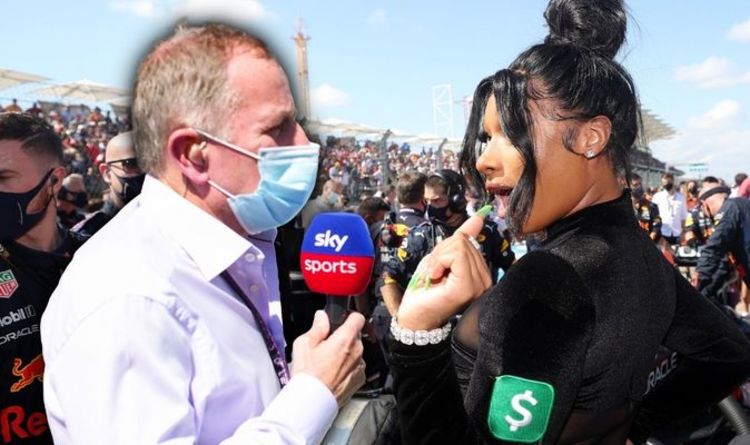 F1 preview: A lap at the United States Grand Prix

Martin Brundle says he did not ask F1 bosses to bring in new rules surrounding protocol on the track before a race after he was involved in a high-profile incident with American rapper Megan Thee Stallion’s entourage. The presenter attempted to speak to the 26-year-old while performing his first pre-race grid walk since the Covid pandemic began at the United States Grand Prix, but was “biffed” away by bodyguards.

Footage of the incident was shared widely on social media and was discussed and dissected in the news and on TV talk shows in both the UK and US.

Brundle attempted to speak to the rapper as she made her way along the grid, much to the annoyance of her large entourage.

He was blocked by a huge man who was leading the group, who also appeared to push a camera out of the way, while another guard and “Malfoy lookalike” told the Sky Sports presenter he could not ask questions.

“I can because I just did,” was Brundle’s snappy retort, before he decided to move on.

“I have felt under pressure on the grid before but by people called Senna, Prost, Schumacher, Mansell, Piquet and so on,” he wrote on Twitter after the incident.

JUST IN: Max Verstappen ‘will be told off’ after leaving Hamilton in his wake

“Bodyguards visiting the grid for the first time don’t bother me, everyone’s got a job to do, but they could maybe learn some manners and respect on our patch.”

At the Mexican Grand Prix, the first F1 race since the incident, Brundle told Sky Sports F1 viewers that new rules had been brought in to stop it from happening again.

“There have been new rules introduced, that any celebrities on the grid must not have bodyguards any longer,” he confirmed.

“It must be the ‘Brundle clause’ and they are obliged to talk to me. I sort of like it if they ignore me, to be honest.”

The 62-year-old admitted he prefers talking to celebrity guests who have a genuine interest in the sport rather than those who are simply there to promote themselves or a particular image.

“I like to call out some of the celebs I think are just using the grid a little bit, if I’m honest. They don’t really have a passion,” he added.

“I know there are millions of fans at home going ‘I should be on that grid. I’m a massive Formula 1 fan, not them’.

“But my claim to fame at last. I get ignored by Megan Thee Stallion, I get biffed out of the way by a man mountain and then told off by a Malfoy lookalike who doubtless was on his first ever time to a Formula 1 grid.”

Brundle has now specified that he did not ask for those changes to be implemented, and simply called for celebrities invited to the F1 grid to “enjoy the privilege”.

“For the avoidance of doubt I don’t care who visits the F1 grid, the more the merrier,” he wrote on Twitter.

“Talk to me, ignore me, shove, wave, hug, call me names, whatever makes you happy.

“All I ask is that you soak up the atmosphere, enjoy the privilege. I’ve not asked for any grid protocol changes.”

Alonso claims Schumacher was his greatest rival in F1