F1 pundit Martin Brundle has warned Mercedes and Lewis Hamilton to “be careful what you wish for,” as they push for the removal of FIA race director Michael Masi. The Australian was central to the controversy that overshadowed the season-ending Abu Dhabi Grand Prix, which culminated in Max Verstappen overtaking Hamilton on the final lap to take the chequered flag – and the F1 world title.

Hamilton appeared to be cruising towards victory when Williams driver Nicholas Latifi careered off the track late on, prompting the deployment of a safety car.

Masi initially ordered that cars couldn’t unlap themselves whilst the FIA vehicle remained out on the track, but then under pressure from Red Bull boss Christian Horner, altered his instructions and ordered the safety car off the track on the penultimate lap.

It ensured a final-lap shootout between Hamilton and Verstappen, and with the Dutchman on fresher tyres, he inevitably seared in front of his rival in a dramatic finale.

Mercedes launched two protests over the procedure, both of which were dismissed, and despite serving notice of intent to appeal, later released a statement reluctantly confirming they would not be taking that course of action.

However, that announcement came with terms and conditions, with the FIA promising Mercedes a thorough enquiry into the events of the Yas Marina. New President Mohammed Ben Sulayem has taken personal involvement, promising a conclusion by February 3.

The Silver Arrows have also reportedly demanded the removal of Masi, who has served as FIA race director since March 2019 – with Hamilton set to retire if he doesn’t leave his position.

Now Brundle, who was commentating for Sky Sports has the drama unfolded in Abu Dhabi, has said “He’s [Masi] clearly only got one life left hasn’t he, and I don’t know if that’s tenable all round.

“But who would you replace him with? Be careful what you wish for. And what I absolutely know for sure is that changing Michael Masi will not fix the problem.”

Brundle was debating with Damon Hill and Jonny Herbert on a Sky Sports F1 podcast titled Abu Dhabi: One Year On, and argued that the expanded 2022 season would need more than one person presiding at races.

“This is way too big a job for one person to handle in a 23 race season, and it’s only going to grow. We are all over the world.

“It’s just growing exponentially. So Masi if he stays needs a lot of support around him and I expect that’s what they’re looking at in this moment.

“And who would actually want to step into his shoes right now?”

Hamilton himself has embarked on a vow of silence since the Grand Prix in question on December 12, and both he and Mercedes boss Toto Wolff boycotted the annual FIA prize-gala in Paris.

Wolff has told reporters the British driver is “disillusioned” over what transpired though, and has notably declined to quash rumours of retirement, 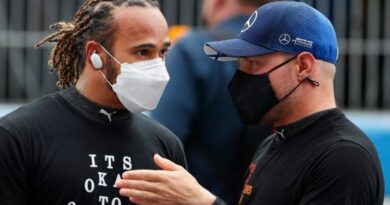