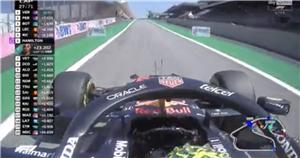 Max Verstappen was heard giving a sarcastic comment over his team radio after he was issued with a black and white flag for ‘unsporting behaviour’ at the Brazilian Grand Prix.

Verstappen played his part in one of the great Formula One battles alongside title rival Lewis Hamilton, but it was the latter who came out on top thanks to a remarkable comeback from 10th on the grid.

Despite holding the lead in the latter stages of the race the Dutchman was pipped by the seven-time world champion late on, however their battle was a dramatic one to say the least.

So much so that Verstappen was issued with a black and white flag part way through for unsporting behaviour as he weaved across a straight on the Sao Paulo track.

Following the flagging, the Dutchman received a message from his Red Bull team explaining why to which he replied: “Yeah, perfect. Say hi.”

It was clear from Verstappen’s snappy comment that he was less than impressed with the ruling and being overtaken by Hamilton, who looked all-but out of the race after beginning yesterday’s sprint in dead last.

Can Hamilton catch Verstappen in the F1 standings? Let us know in the comments section below.

However, a heroic performance in both the sprint and the race ensured he was the man coming away from South America victorious, to keep himself well in the hunt for a record eighth title.

In spite of the visible frustrations, Verstappen was still able to secure second place meaning he remained 14 points clear of the Englishman with just three races left in the campaign.

This flagging during the race was not the first time Verstappen found himself in trouble in Brazil, after he was issued a £42,500 (€50,000) after he appeared to examine Hamilton’s car after he was disqualified for a DRS infringement.

Following the heavy fine, Verstappen still remained in high spirits and again showed his sarcastic side to punishment.

When asked about the fine he commented: "It’s quite a big fine, so I hope they have a nice dinner and a lot of wine.

"I hope good expensive wine, that would be nice. They can invite me for dinner as well. I’ll pay for that dinner too.

When asked by fellow driver Valtteri Bottas if he had to personally pay the fine, or his team did, the Dutchman jokingly replied: “I do have to pay. So that’s a little bit less FIFA points for me than on my laptop." 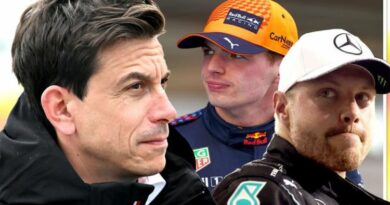 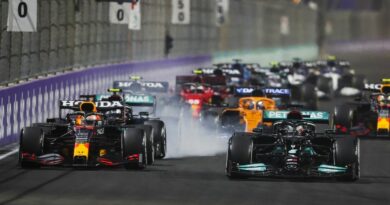