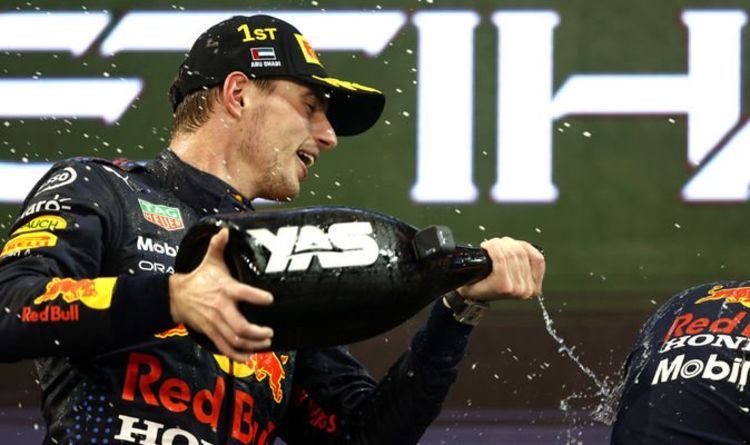 Max Verstappen apparently celebrated his maiden F1 title on a yacht in the early hours of Monday morning but left at 4.30am as his team continued their celebrations until 7am. Verstappen overtook title-rival Lewis Hamilton on the final lap of the Abu Dhabi Grand Prix to claim championship glory.

The desert race was mired with controversy after an apparent rule change gave Verstappen the opportunity to win a race he had looked to be out of.

Hamilton had appeared to have done enough to win the contest as he virtually led from the off after going past Verstappen seconds after the race had started.

But Williams’ Nicholas Latifi crashed into a wall late on, meaning a safety car was deployed.

Verstappen made a quick stop in the pits, while Hamilton was unable to change his tyres without losing track position.

It had been decided before the race that cars which had been lapped would not be allowed to pass other drivers.

But that would have seen Hamilton and Verstappen separated by five cars following Latifi’s crash. And Verstappen’s hopes of winning the race would have ended.

The rule was quickly reversed by the FIA to allow the five cars in between to pass. And that meant Verstappen, with his fresh tyres, was then neck-and-neck with Hamilton for a one-lap sprint.

And the Red Bull driver whizzed past the Briton to claim victory and win the championship.

According to the Evening Standard, Verstappen headed for Red Bull’s private yacht in Yas Marina after his victory, where he partied alongside his core racing team.

That team included team principal Christian Horner and his wife and ex-Spice Girl Geri Halliwell as well as father Jos, who also used to race as an F1 driver.

Verstappen partied until the small hours of the morning before being played out to Queen’s We Are the Champions.

According to Sky Sports, the rest of the team stayed for another two-and-a-half hours as they celebrated Verstappen’s unlikely victory.

The fall-out from the season climax is likely to continue for some time after Mercedes expressed an intent to appeal.

The Silver Arrows had two protests rejected in the aftermath of the race but have until Thursday to lodge their first formal appeal.

Despite Verstappen’s win, Red Bull weren’t able to win the Constructors’ Championship as they finished 18 points behind arch-rivals Mercedes.

Mercedes have now won the last eight Constructors’ Championships, but Hamilton will have to wait until next year in his attempt to get his hands on a record eighth title.