The Briton exposed a minor mistake from the Dutch driver in Portimao to snatch victory at the Portuguese Grand Prix – his second in three races this season.

And after Rosberg’s praise for his former rival and teammate’s “phenomenal performance”, Verstappen squashed talk that he is unaware of the meteoric challenge in front of him this season.

“I don’t need Nico to make me realise how good Lewis is,” he said. “I know he’s very good, otherwise you don’t win so many championships.”

Despite falling short in Portugal, Verstappen admitted there is great “trust” in his battle against the seven-time world champion.

“Yeah, it’s been really cool,” Verstappen said of his rivalry with Hamilton. “Especially when you race a driver, when you know that you can go to the absolute limit, I guess you can trust each other to just race super hard.

“I think that’s always really nice because you can see in the three races… it’s been really close to each other but predictable.

“Lewis has never had something like ‘oh, we’re going to crash’ or something. I always have full trust in Lewis that we all give each other enough space.”

And it seems that feeling is reciprocated by Hamilton, who insists despite tough competition, their title race will be “fair” on the track.

“I think we will continue to keep it clean and keep it on the edge but I don’t think either of us has a plan to get any closer than we have been.” 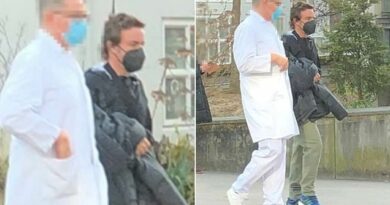 Lewis is back! Hamilton arrives at the Yas Marina