Home » Racing » F1 » Max Verstappen’s veiled dig at Lewis Hamilton: ‘I don’t check how many followers I have’ 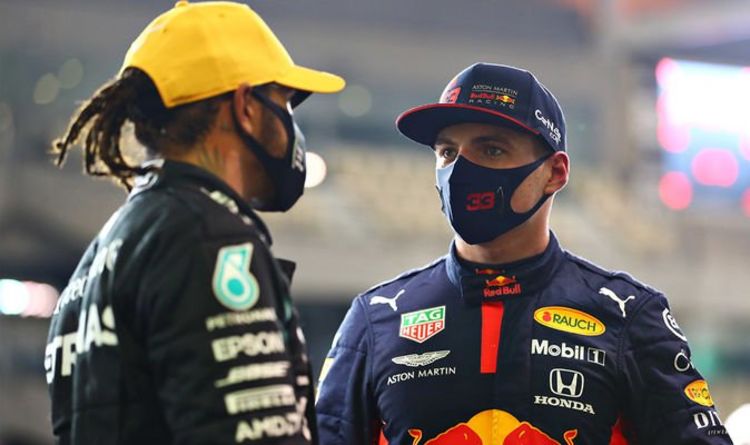 Hamilton and Verstappen have both said they will race fairly this week at the Mexican Grand Prix as they battle for the title. The Briton is currently 12 points behind his Dutch rival after Verstappen secured victory at the USA Grand Prix in Austin, Texas last time out. Ahead of this weekend’s race, Hamilton said: “I always want to win it in the right way and if you’re going to lose it, you lose it in the right way also.” Verstappen said: “I will race hard like Lewis does and everyone else does and of course always try to keep it clean.”

“I am here to win in the right way, and that’s through sheer skill and determination and hard work.”

The Mercedes and Red Bull drivers have seen their rivalry intensify this season, including in July when Verstappen appeared to criticise Hamilton’s social media activity and his friendships with celebrities.

In the last two years, Hamilton has uploaded a clip of himself chatting to Tom Brady, a video of himself joking around with Will Smith from 2019, and a shot of himself with Justin Bieber at a race ‒ and Prince Harry at Silverstone.

Following these posts, Verstappen told the Mail in July: “I wouldn’t hang out with celebs just for my profile.

“With some well-known people you can strike a good connection and build up a friendship, but I would only meet those I think are friends.

“I won’t call them mates when they are not mates, but just famous people.

“I want to spend time with family and real friends.

“I don’t spend too much time checking my Twitter or Instagram accounts to see how many followers I have or worry about how many ‘likes’ my posts get. I am not interested in that.

“If I am in Holland, which is not often, I mostly stay in the house, again with family and friends.”

This was interpreted by Verstappen’s interviewer, Jonathan McEvoy, as “dig at Hamilton”, prompting him to ask about their relationship.

“It’s just that we live different lives, so that limits how much we could meet away from the track anyway.

“I don’t pay any attention to mind games. These things don’t bother me.

“I just focus on the track in the best way possible. Anything beyond that is not relevant to me.”

Verstappen and Hamilton’s rivalry has been at its hottest on the track this season.

At Silverstone in July, Hamilton collided with Verstappen and sent him into the wall before going on to win the race.

Following the race, the Red Bull man accused his Mercedes counterpart of being “disrespectful” with his celebrations.

In Monza, Italy, the title rivals clashed once more.

During the race, which took place in September, Verstappen and Hamilton came together at the first chicane of the famous track, leading to both drivers retiring from the race.

The Red Bull car bounced off the curb and ended up on top of the Mercedes in a terrifying moment.

Following the incident, Hamilton said the halo around his cockpit had saved his life.

He said: “I feel very, very fortunate today. Thank God for the halo. That ultimately saved me. And saved my neck. I don’t think I have ever been hit on the head by a car before and it is quite a shock for me.

“If you see the image, my head is quite far forward. I have been racing for a long, long time and I am so so grateful I am still here and feel incredibly blessed that someone was watching over me today.”

Verstappen, meanwhile, faced criticism for not checking on his competitor, instead walking away from the incident.

Hamilton added: “I did see Max get out of the car and walk by and I felt that a little bit surprising because when we do have incidents, the first thing we have to ensure is the guy we crash into is OK.”

The stewards found Verstappen at fault for the accident and have given him a three-place grid penalty for the next round in Russia.

But the Dutchman was not happy about this.

He responded: “I was a bit surprised to hear the three-place grid penalty myself, but at the end of the day, it’s what they decided. I don’t need to agree with it.

“I have my own views, of course. But we just move on and make the best of it. It is, of course, not ideal. But it’s not the end of the world.”

He added: “I’m pretty calm and chilled about everything. It’s more the questions I keep getting about it. We’re all professional enough to leave this behind at Monza, and let’s continue again here in Sochi and the races after that.”