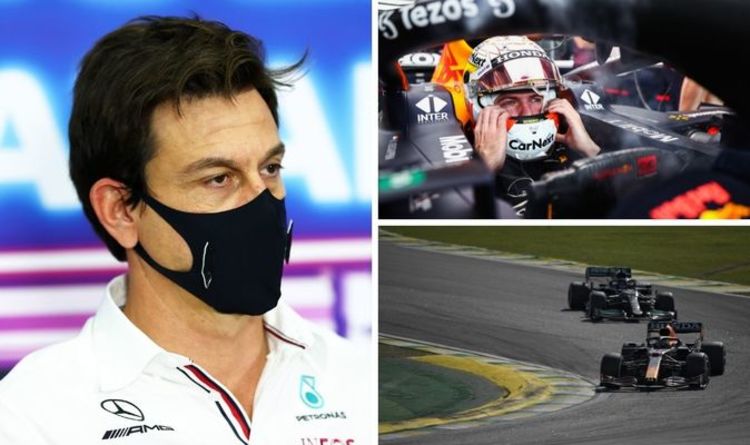 Mercedes have explained what they have achieved by appealing against the decision not to penalise Max Verstappen at the Brazilian Grand Prix, despite the FIA denying it. The German manufacturer requested a ‘right to review’ the decision following Lewis Hamilton’s win on Sunday.

After being awarded a five-place grid penalty, Hamilton had one of his great drives to climb from P10 and take the chequered flag at Interlagos.

The result means the Brit has closed the gap on championship leader Verstappen ahead of the final three races.

On lap 48 on Sunday, the two rivals were battling for the lead with Hamilton’s Mercedes appearing to narrowly edge ahead of the Red Bull, which was on the inside.

Verstappen ran wide and the move forced both drivers off the track, with the Dutchman holding the lead for a few more laps before the seven-time world champion finally took the lead.

While Hamilton took the lead and win anyway, Mercedes boss Toto Wolff believes Verstappen should have received a penalty.

An investigation was deemed unnecessary after the FIA consulted footage provided by broadcast cameras – but Verstappen’s on-board footage shows the Dutchman clearly didn’t turn as aggressively as he could have, forcing Hamilton from the road.

Mercedes submitted a ‘right of review’ after seeing the footage, which officials did not have during the race but emerged on Tuesday.

On Friday, the FIA announced that Mercedes’ request had been denied, which means the Dutchman will not receive a retrospective penalty for the incident.

Mercedes boss Toto Wolff explained his reasoning behind the decision to appeal.

“I think we already knew this wasn’t going to go anywhere,” the Austrian revealed.

“It’s more the principle – and finding out what the interpretation of the stewards is of that case. Now you have to move on.

“What have we achieved? I think we have achieved a public discussion around it because I see a risk that we will see it happening in the next races, it could well end up in the stewards’ room or the court room if people aren’t happy with how it is being raced out there.

“It’s fine with us. Absolutely. It’s hard racing. If this is the regulations, then let’s just move on and race exactly that way and I think this is clear now.”

Red Bull were reportedly surprised their rivals have protested as they believe the on-board camera from Verstappen’s car supported the view of race director Michael Masi that it was simply hard racing.

Mercedes F1 team principal Wolff said after the race that it was ‘laughable’ that Verstappen had not been penalised for the incident.

Formula 1 travels to the Losail Circuit for the Qatar Grand Prix on November 21, with Red Bull star Verstappen holding a 14-point lead over Mercedes’ Hamilton. 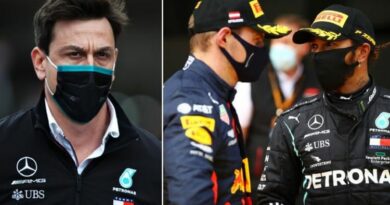