Red Bull team principal Christian Horner has admitted he would be “surprised” if Mercedes drop Valtteri Bottas and replace him with George Russell before the end of the season.

It has been reported that Bottas, who is already 37 points behind teammate Lewis Hamilton after just three rounds, could be relieved of his duties by the Silver Arrows.

The Finn, 31, in his fifth season with the world champions, started on pole at last weekend’s Portuguese Grand Prix but fell away to finish third.

Russell, 23, is waiting in the wings after excelling as a replacement for a Covid-hit Hamilton at the Sakhir GP in December. He would have won and beaten Bottas but for a poor Mercedes pit-stop and late puncture.

Russell, a junior driver for the Silver Arrows, continues to impress at Williams, and qualified 11th at Portimao in his uncompetitive machinery.

But Red Bull boss Horner, whose team have a track record of mid-season driver swaps, does not believe Mercedes will adopt their blueprint.

“Valtteri has demonstrated he can drive the car very quickly,” he said. “Circumstances are always going to happen so let’s see how things pan out, but Valtteri has done a great job for Mercedes over the last few years.

“I would be surprised if they did switch Valtteri and George around mid-season.”

It may well be in Horner’s interest to see Bottas remain with Mercedes given his struggles.

Red Bull are only 18 points adrift of the Silver Arrows in the constructors’ championship, while Max Verstappen trails Hamilton by just eight points ahead of this week’s Spanish Grand Prix.

Publicly, Mercedes team principal Toto Wolff says Bottas, who crashed out in Imola following a coming together with Russell, has the full support of the grid’s all-conquering outfit.

The Austrian said: “Valtteri will be on top form. When you consider where he came from following Imola, which was a write-off, he put it on pole in Portugal and had a solid race.

“We will push him hard, continue to support him and see what he is capable of doing in Barcelona.” 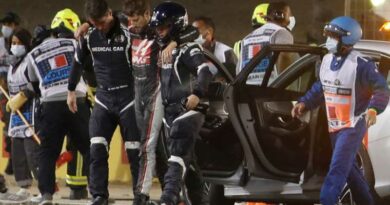