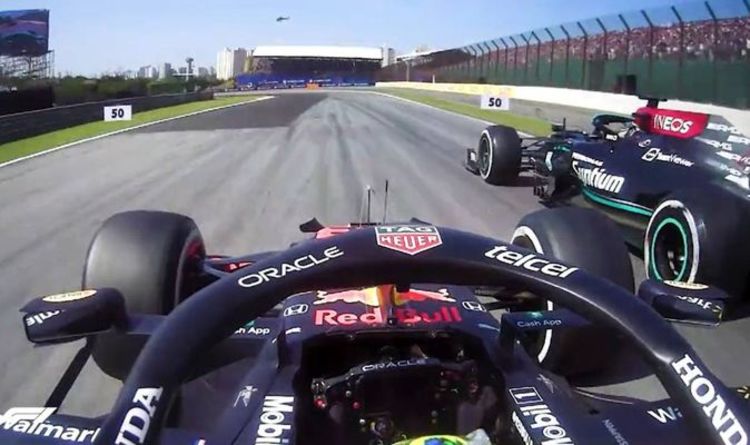 Max Verstappen may not escape punishment after all following his near-miss with Lewis Hamilton at the Brazilian Grand Prix with new footage being released on Tuesday. Hamilton had the much faster car at the weekend and raced through the pack to get on the back of Verstappen for several laps.

The Dutchman was doing his best to keep Hamilton at bay and seemingly overstepped the mark when he appeared to force the seven-time world champion off the track on lap 48.

Red Bull were quickly on the radio to Race Director Michael Masi, insisting it was a case of letting them race.

Mercedes, though, were in uproar when it was decided that no punishment would be taken on Verstappen.

In the end, it didn’t matter as Hamilton eventually got past Verstappen before taking the chequered flag for his first win since September.

But Masi admitted after the race that they didn’t have all the footage available to them at the time, suggesting retrospective action could be taken.

“It is only the cameras that are broadcast that are basically what we have access to throughout,” he said.

“It hasn’t been obtained yet. It has been requested.”

When asked if the footage could be a “smoking gun” for Verstappen, Masi added: “It could be, absolutely.

“But we didn’t have access to it. It has been downloaded and once the commercial rights holder supplies it, we will have a look.

“Absolutely [I will look at it]. We’ve got the forward-facing, the 360…all of the camera angles that we don’t get live will be downloaded and we will have a look at them.”

Now that on-board footage has been released, race stewards are expected to review the video and determine whether a punishment will be handed down to Verstappen.

The Dutchman explained after the race that he took the safer option in driving off the track as he was beginning to lose grip.

“We both of course, tried to be ahead into the corner, and so I braked a bit later to try and keep the position and the tyres were already a bit worn,” he said.

“So I was really on the edge of grip, so that’s why I think I was already not fully on the apex. And it’s a safer way, of just running a bit wide there.”