Former F1 driver Timo Glock believes Max Verstappen has made a “huge leap” this season and that the Dutchman’s maturity can be pivotal in a tense race with Lewis Hamilton.

Verstappen leads the world champion by six points with six races remaining in a highly competitive season, with Red Bull finally on the brink of ending Mercedes’ reign of dominance.

The F1 travelling circus heads to Texas next where Hamilton has an imperious record, however, Glock believes Verstappen’s temperament could be decisive in wrecking the Briton’s pursuit of a record-breaking eighth world championship.

“Lewis never shows on the outside that he has pressure. He knows very well how to come across as calm,” Glock told Sport1.

“Of course, he also knows that when he puts on his helmet, it all depends. But he has found a way to appear relaxed and cool.

“Max Verstappen has also managed that well so far. For me, he has made a huge leap, he has become much more relaxed, much more controlled in many ways.

“Two years ago, in a situation like the crash in Monza, he probably would have opened Lewis’ helmet and punched him. Now he leaves him on the left and thinks to himself: ‘See how you get out of this.’”

Although Mercedes are expected to be faster in the US, Red Bull principal Christian Horner hopes Verstappen will thrive in higher-altitude races, such as in Mexico and Brazil.

“I think we know the next race in Austin has been a Hamilton stronghold for quite a few years now,” he said. “But then Mexico and Brazil, hopefully, the higher altitude races tended to be quite strong for us in the past, and then not really sure what to expect in the last three.

“It is going to be fascinating but we are going to have to be at the very top of our game.” 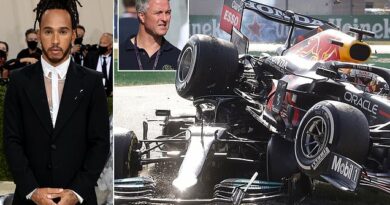