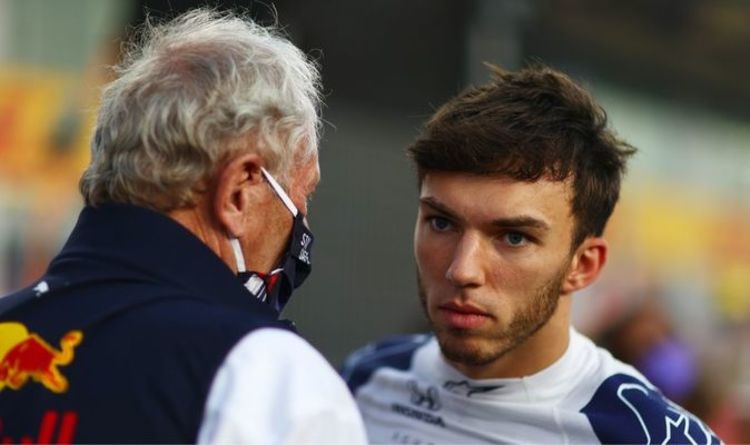 Pierre Gasly believes he deserved more “recognition and reward” from Red Bull bosses for his recent performance at sister team AlphaTauri. Gasly was left bitterly disappointed by his stint at Red Bull after he was called up from, the then-named junior team, Toro Rosso ahead of the 2019 season.

Things started to fall apart quickly for the Frenchman, who suffered poor results and bad luck throughout the first half of the season.

But he was quickly demoted from the senior outfit midway through the 2019 campaign and was replaced by Alex Albon alongside Max Verstappen.

Since then, however, Gasly has grown in confidence with a podium finish in Brazil, a memorable race win at Monza, and P3 at the Azerbaijan Grand Prix as he attempted to showcase his talent to the top team.

But seemingly still not enough, Red Bull extended the contract of Sergio Perez, which was agreed ahead of the Belgian Grand Prix.

It was the first time Red Bull looked outside of its young driver programme in years.

JUST IN:
Lewis Hamilton to get his wish as F1 boss drops hint

Gasly insisted he hasn’t been treated fairly and ‘deserves’ more after being snubbed by Red Bull. Asked if he felt aggrieved by the situation, he told Auto Motor und Sport: “No. My desire, my will to fight for World Championships is very strong. I’m in Formula One to fight at the top. That motivates me to keep improving.

“I won’t lie, it’s hard to deliver a season like that. And then when I compare myself to those who got the opportunity for a Red Bull seat, it’s disappointing. Based on the numbers and results, I have delivered a better performance than anyone else in this team.

“But at the end of the day, I don’t get the recognition and reward for that. That’s hard to swallow. It disappoints me, of course.

Having regularly finished in the top eight throughout the season, there had been some suggestion Red Bull would reward the Frenchman for his achievements.

But as Perez signed his new contract, Gasly was forced to remain in the junior category for another season.

He added: “I know what I want to achieve in this sport. I want to fight at the top. That hasn’t changed.

“Next year it won’t be that far yet, but that doesn’t mean if it’s not there in 2022 it won’t happen in 2023. I continue to give full throttle and believe in myself.

“I hope the AlphaTauri will be as good as it was this season, despite the change in regulations.”

Red Bull have been urged by Gasly’s boss Franz Tost to take another look at the 25-year-old, after praising the F1 race winner ahead of the new season.

“What’s important is I still have the feeling he can improve because that’s decisive then if you are on this level. If we provide him next year with a competitive car, he will be there 100 per cent.

“From the driving, he has now the experience of how to set up the car, how to manage the tyres, he can read the race, which is very important, he is on the radio, the questions he is asking, and he made this year another big step forward, a real big step forward.

Pre-season testing gets underway on February 23 before the Bahrain Grand Prix season opener on March.