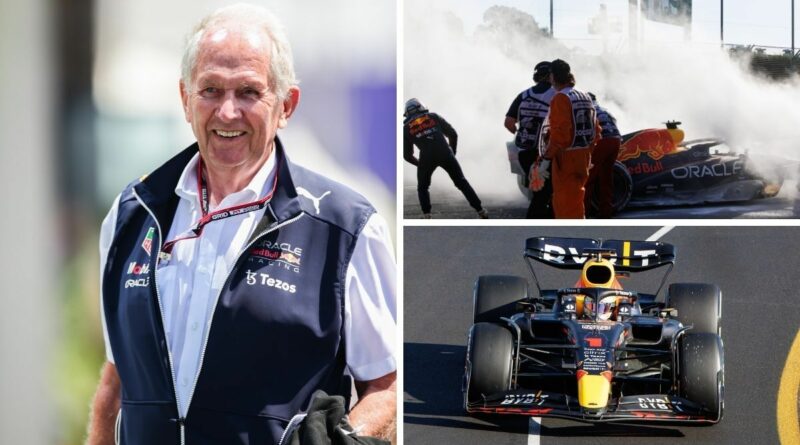 Red Bull advisor Helmut Marko has revealed what he said to Max Verstappen after the Dutchman experienced his second engine failure in three races to open the 2022 season. The reigning world champion has only reached the finish line once so far, winning the Saudi Arabian Grand Prix.

In truth, the 2022 F1 season has thus far belonged to Charles Leclerc and Ferrari, with the Monegasque driver winning the season-opening race in Bahrain as well as the Australian Grand Prix last time out. Verstappen claimed the win in Saudi Arabia between the two events, with Leclerc finishing second.

The Dutchman is currently 46 points behind championship leader Leclerc, with Verstappen failing to get to grips with his new car. The handling of the 2022 car – the RB18 – has made it more difficult for Verstappen to take advantage of his aggressive driving style.

In addition to this, Red Bull have struggled immensely with reliability issues as the Dutchman has retired in two of the three races. Regardless, Marko believes the world title is still a realistic goal given how early it is in the season – a message he relayed to Verstappen after his disappointment in Melbourne.

“I told him that we still have 20 races left with over 500 points up for grabs with sprint races and fastest laps,” Marko told F1insider.com. “Nothing is lost there.”

Last season, Verstappen and Red Bull enjoyed a thrilling season which saw the Dutchman secure the world championship in which he only suffered two DNFs – both from collisions with Lewis Hamilton. After suffering technical issues in Bahrain and Melbourne, he has already matched last season’s reliability record after just three races.

Verstappen appeared frustrated at his DNF at the Australian Grand Prix and has played down his chances of retaining the world title in 2022. However, Marko has refused to rule out the Dutchman’s chances of victory and believes improvements are coming for Red Bull.

“I don’t see it that way,” Marko said when quizzed on the reliability issues plaguing Red Bull’s season. “The two defects we had were of different nature.

“Together with our engine partner, we are working tirelessly to prevent this from happening again. But basically two failures in three races are an absolute no-go.”