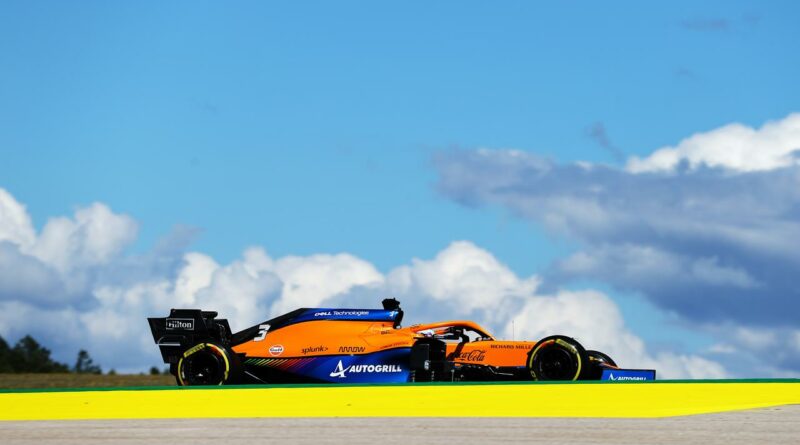 Daniel Ricciardo believes he took a positive step forward in his ongoing battle to find peace inside his new McLaren during practice for the Portugal GP.

The Aussie was eighth on the timesheets after the second session on Saturday morning (AEST) but finished ahead of teammate Lando Norris, who was concerned after only being 12th quickest in Portimao.

“I think it was a better day personally,” Ricciardo said.

“For me, I just felt like I got on with it from the start of FP1 … Certainly, I felt like today I took a step forward in terms of just my confidence in the car and ability to hang it out a little bit more.”

Ricciardo has made no secret about his struggle to come to grips with a car that doesn’t quite suit his driving style.

So he spent some time in the simulator after the Emilia Romagna Grand Prix last month and it paid dividends.

“It’s a little unique, so I’ve been working on that in the simulator and tried to put that into display today. I think that was coming and naturally just getting more confidence with the way the car slides.”

“I think the general characteristics of the car are, let’s say, what they are at the moment,” he added. “At some corners, I can for sure use my style, but for the majority the best way to drive it is a different style.

“I’m trying to let the guys know where the weaknesses are and how I’d like to drive the car, so we’re trying to bring some updates to address that. But until then, I’ll just learn how to drive it how it is.”

Daniel Ricciardo is on the way up. (Photo by Mark Thompson/Getty Images)Source:Getty Images

Ricciardo said McLaren CEO Zak Brown and team principal Andreas Seidl had calmed him after his disappointment at finishing seventh in Italy, while Norris secured a podium.

“It’s hard to take because I’m sort of a veteran now so why should it take time,” Ricciardo said.

“I’m experienced coming into this team and everyone is kind of treating me like a rookie, which kind of is true because I’m a rookie with this car and this environment.

“After Imola I was upset that I couldn’t do better and get more, but Andreas and Zak, they are all just like ‘chill dude, it’s going to come’. I won’t chill too much, but I know that it’ll come eventually.”

Norris’ sensational start to the season was tempered somewhat as he made a couple of errors in Portugal.

“There were a lot of people making mistakes, myself included, so it’s not easy to put it all together,” the Brit said.

“You don’t have like an obvious one lap where the tyres are good, they last two or three laps here. So yeah, it’s different and it is tricky.

Ricciardo’s former team Alpine-Renault look like firing its first shot of the season after underwhelming results in Bahrain and Imola.

The Aussie’s replacement, Fernando Alonso, and Esteban Ocon were fifth and sixth on the timesheets in a threatening sign for the rest of the middle pack.

“Normally we had a big gap to the Alpine the last few weekends – but this weekend, they seem a lot more competitive. So it makes the race, or the chance to get into Q3, a lot more difficult,” Norris said.

“It’s two more cars we might be racing. So it’s exciting, but it makes life a bit more tricky, and a bit closer, so it’s going to be tough.”

World champion Lewis Hamilton set the fastest time in second practice. The British driver clocked 1min 19.837sec in the Mercedes to edge out Red Bull’s Max Verstappen on 1min 19.980sec with Valtteri Bottas, in the second Mercedes, in third on 1min 20.181sec.

Bottas had set the fastest time in the morning session with 1min 19.648sec.

The afternoon session at Portimao was delayed by 10 minutes to fix a faulty manhole cover before Hamilton set the pace, topping practice for the first time this season.

Seven-time world champion Hamilton leads the season standings by one point from Verstappen after he won the opener in Bahrain before his Dutch rival hit back in the Emilia Romagna GP at Imola.

As he looked ahead to the weekend on the track, Hamilton predicted another tense tussle with Red Bull.

“We look very close, I think it will be tight,” he said.

“I don’t know how Max’s lap went, but mine wasn’t perfect. The car can be even faster and there are improvements possible.”

Verstappen, who was also second fastest in the morning, insisted there was little to separate Red Bull and Mercedes.

However, he was wary of the track conditions.

“The conditions are very similar to last year and the tarmac is super slippery,” said Verstappen.

“It seems tight with Mercedes this weekend again and the car felt alright but we still have some work to do ahead of tomorrow, that’s for sure.” 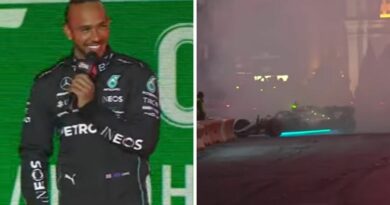 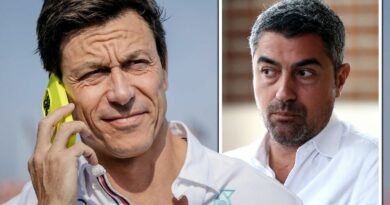