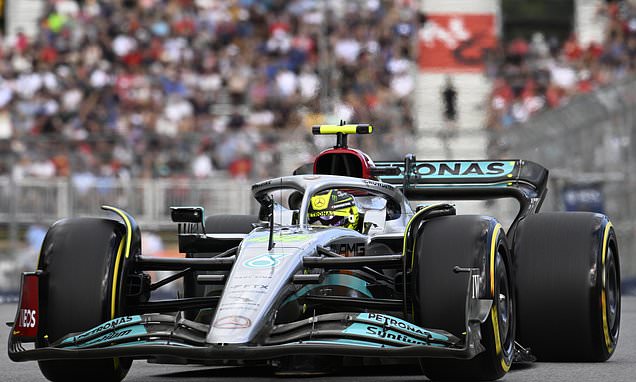 ‘It felt like wearing an invisible neck brace’: The Mail on Sunday travels to Silverstone to experience the impact of g-force on the body after Lewis Hamilton’s claims he has ‘shrunk an inch’

Lewis Hamilton claims he has shrunk an inch. He’s getting more headaches than usual. After his race in Baku, the seven-time world champion clambered out of his Mercedes car so tentatively it looked like he may collapse like a discarded marionette.

All of this due to the effects of porpoising, the phenomenon of cars bouncing along the track that has become so brutal this season that Formula One’s governing body has stepped in to try to fix it.

Hamilton revealed the vicious jarring puts 10G of force – 10 times the force of gravity – up and down his back. 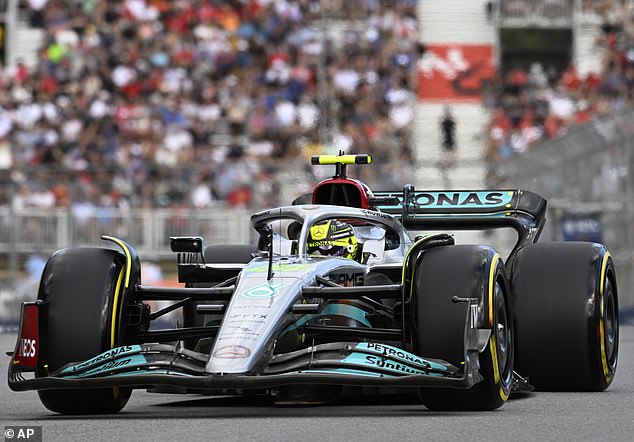 The Mail on Sunday visited Silverstone this week to experience the impact of g-force on the body.

Sat on a weights bench inside the Porsche Human Performance lab, this aching, sweaty reporter had a harness strapped to his head while a sports scientist pulled on its elastic cords to increase the force pulsing through my neck as I tried to stop my head flinging to the other side of the room.

By the next morning, it did not matter which way my neck moved. Any position other than perfectly still, head up, eyes straight ahead and the muscles stiffened, clenched towards the shoulders like angry fists. It was like wearing an invisible neck brace. Mercedes have won eight consecutive Constructors’ Championships between 2014 and 2021

We only reached 4G. The maximum g-force that F1 drivers usually endure around the harshest corners is 6G, six times the weight of your head and helmet.

Imagine, for a moment, that your head is no longer your head but actually an overweight Labrador called Charlie, who darts after balls in any direction and your neck must now support all of 80 pounds of his weight. Our 4G force was roughly the weight of a Border Collie.

The forces now going up and down Hamilton’s back are said to be 10G. His Mercedes team-mate George Russell said recently that it was ‘only a matter of time’ before porpoising caused a major accident. The FIA, motor racing’s governing body, are now changing regulations due to concerns over driver safety. 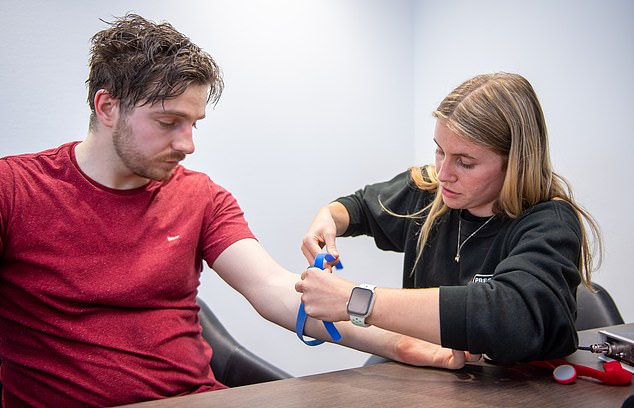 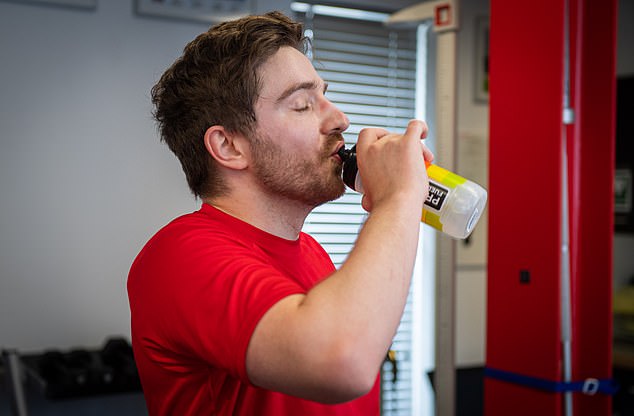 ‘Concentration has to be 100 per cent,’ says Jack Wilson, sports scientist at Porsche Human Performance. ‘If you throw severe back pain into the mix on top of all the other stresses an F1 driver has to contend with, that’s going to be eating away at the back of your mind — how many more laps have I got to go, how am I going to manage this. All of these things occupy brain power.

The more you are putting into that, the less power you’re putting into thinking about how the car is doing, managing the tyres, controlling the gap between you and the driver behind. It’s another layer of difficulty. What can be done to help that? You could say, okay, we’ll try to make our drivers strong and robust but when you’re going at that level of g-force load, at that frequency, and for that duration, it’s difficult to make your driver bulletproof.’

As part of The Mail on Sunday’s visit, courtesy of Precision Fuel and Hydration, we endured the same fitness and reaction tests as F1 drivers. Most of us have, at some point questioned from the comfort of our own sofa, how hard it can be. 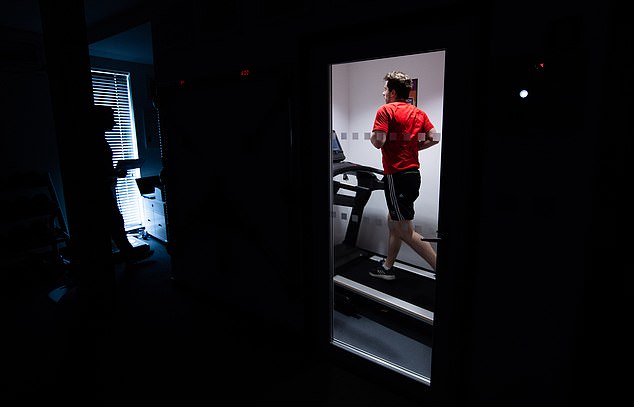 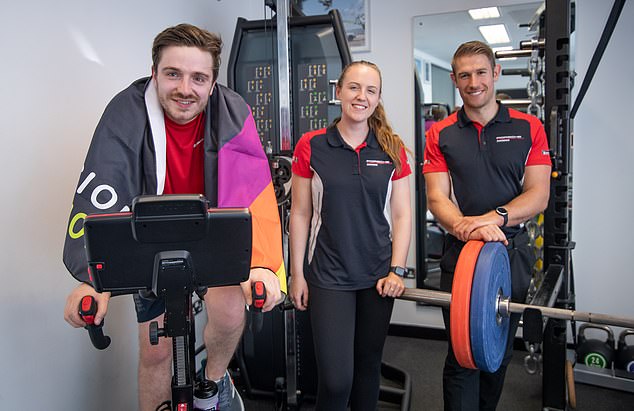 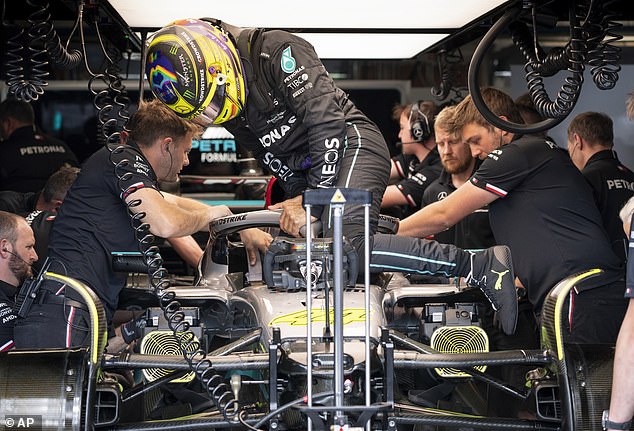 We soon found out. Even by the first test of the day at Silverstone, simply standing on the cold metal plates of a body analysis machine, the difference between the drivers and the doubters was clear.

Their body fat percentage is around eight percent. Mine was more than 26, the same as a lean pork sausage. My hand grip generated 30 pounds less than the average F1 driver despite weighing three-and-a-half stone more. Their necks can withstand three times the force.

It wasn’t just strength either, but reactions too. As a wicket-keeper in a former life, I stood in front of a Batak machine, a board of 12 lights that you whack when they flash up at random, and fancied that this may be the time to put Formula One drivers in their place. I was pleased with my score of 84 in a minute. They exceed 120.

Running on a treadmill until I was about to fall off, dripping and breathless, my lungs took on 40ml of oxygen per minute per kilo of weight. F1 drivers often reach double that, pushing the scores of endurance runners and cyclists.

‘Why an F1 driver needs to be fit when he just sits behind a wheel is a question that’s very easy for people like you and I to ask when we will never, unfortunately, get to drive a Formula One car,’ said Wilson. ‘Driving a racing car is very physical and requires a lot of mental capacity to get the most out of yourself, the car and to adapt to the situation around you.

‘There’s a lot going on in a Formula One car, irrespective of having another 19 cars on the grid. So you have to have that mental capacity to concentrate, to react, to make the right decisions, to have the ability to process information and to make the most of your visual fields. That varied nature of fitness requirements is what I think separates F1 from other sports.’

Not to mention the heat. The temperature inside the cockpit usually exceeds 45 degrees. In places such as Singapore that can rise to 60 degrees. To simulate such conditions, we stepped into a heat chamber on to a treadmill at 45 degrees. 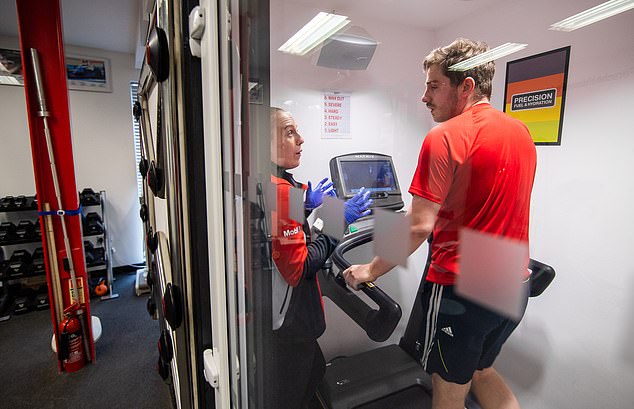 It hit you as though you had just stepped off a plane. A 10-minute jog was more than enough, never mind a two-hour race. Hamilton can lose more than three litres of sweat in that time.

And for a sport where hundredths of seconds separate success and failure, the level of preparation has to match. Even down to how much salt drivers lose in their sweat.

Lose too much, and athletes can cramp up or suffer drops in performance. ‘Lose concentration for just a split second, the next thing you know you can be into the tyre wall,’ said Chris Harris, sports scientist at Precision Fuel and Hydration, who work with F1 drivers to plan and regulate what they consume before and during races to stay at their peak performance. The amount of electrolytes included in their drinks is measured to the finest degree. 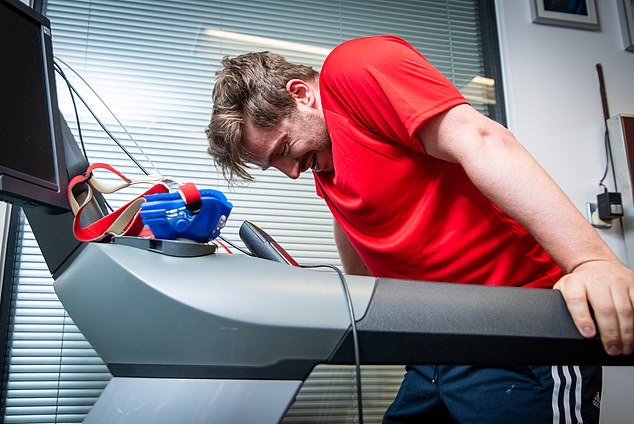 After being hooked up to a strange little machine that tricks your body into sweating, Harris informed me I was a very salty sweater. I’d need a ton of electrolytes to keep me sharp.

From what we’ve uncovered, that won’t be happening anytime soon. F1 drivers, it became clear, put their bodies through immense pressures inside the cockpit. And I didn’t need to step foot in a Formula One car to find that out.

My neck, for one, is pleased to be able just to watch from the sofa.