Mercedes boss Toto Wolff has been on the radio to send encouragement to Lewis Hamilton on lap 31 of the Russian Grand Prix as the seven-time world champion chases down McLaren’s Lando Norris.

Hamilton, who started fourth on the grid, dropped down to seventh on the opening lap after a poor start in Sochi as McLaren’s Lando Norris looked to hold off Carlos Sainz and George Russell on the first and second row.

The seven-time world champion, however, fought back to find himself sitting behind the McLaren of Daniel Ricciardo on lap 25.

Mercedes then came out into the pits, looking as though they were looking to change Hamilton’s tyres to tyres, prompting McLaren to dive into the pits.

But a slow stop for the McLaren team meant Ricciardo tumbled down the order, freeing Hamilton, who then set the fastest lap of the race with a 1:39.908.

However it seemed a bluff from Mercedes, as Hamilton carried on without entering the pits with Ricciardo tumbling down the order.

Hamilton then pitted from second, with a smooth stop from Mercedes as he began his challenge on Norris, with Wolff coming on the radio to say: “Lewis you can win this race!” 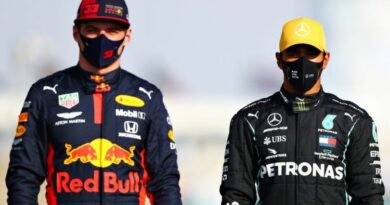 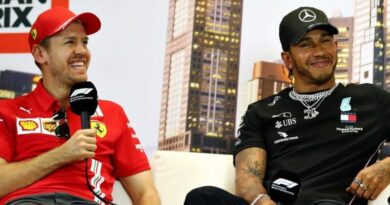