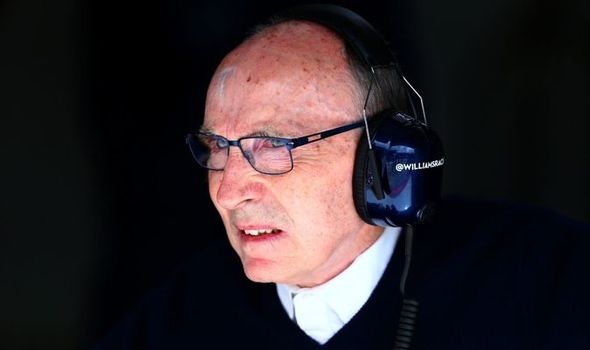 The Williams team he founded won the drivers’ title seven times and the constructors’ championship on nine occasions.

Sir Frank – who marked 50 years as an F1 team owner in 2019 – was taken to hospital on Friday and “passed away peacefully” surrounded by family yesterday.Williams Racing added he was a “much-loved and inspirational figurehead”.

Nigel Mansell and Damon Hill were champions in a Williams car. Hill, 61, winner in 1996, said: “Frank was just remarkable in every respect. His record will stand for a very long time. The only person I could compare him to is [Ferrari founder] Enzo Ferrari. Anyone who runs a team would like to aspire to his achievements.”

Lewis Hamilton and “He was more than a boss – he was a mentor and a friend to everybody who joined theWilliams Racing family.”

Sir Frank suffered a spinal cord injury in a crash in 1986 that left him unable to walk. Doctors said he would live no longer than 10 years but from a wheelchair he led decades of F1 success.

He began to reduce his workload in 2012, leaving the Williams board and letting daughter Claire run the team on a day-to-day basis. The business was sold to Dorilton Capital in August.

Williams’ current principal Jost Capito said: “Despite considerable adversity in [Sir Frank’s] life, he led our team to 16 world championships, making us one of the most successful teams.”

What is happening where you live? Find out by adding your postcode or visit InYourArea

While F1 chief executive Stefano Domenicali said the former mechanic and racing driver “was a true giant” who “battled every day to win”.

His predecessor Bernie Eccelestone, 91, who ruled F1 for 40 years, said: “One wonders that if people like Frank had not been around in the early days whether Formula One would have survived. He was one of the people that built Formula One. It’s the end of an era. But Frank never complained. He got on with things the best he could. He was a fighter. He gelled with everyone and everyone liked him.”

Sir Frank set up his racing outfit in 1969 but hit money problems, at one point running his business from a phone booth. He teamed up with engineer Patrick Head in 1977, backed by Middle East funds.

Triple world champion Ayrton Senna also drove for Williams, who was charged with manslaughter over the driver’s fatal crash at the 1994 San Marino Grand Prix but acquitted years later.

He is survived by daughter Claire plus sons Jonathan and Jaime.