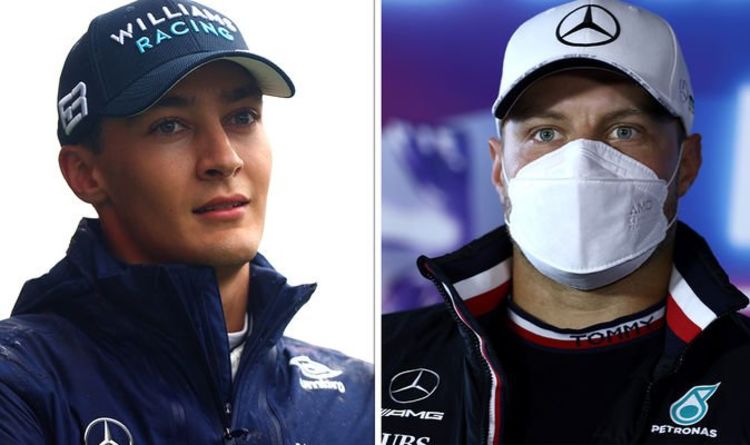 French TV channel CANAL+ have claimed that Valtteri Bottas and George Russell will race for new teams in 2022 – and announcements are just around the corner. Both drivers are in the final few months of their current deals and their futures have been subject of stern speculation.

Russell has been fighting for a Mercedes seat after impressing at Williams and when deputising for Lewis Hamilton last season.

The 23-year-old is set to step up to a Championship-winning car after penning a contract with the Silver Arrows.

CANAL+ claim that an announcement will be made on Tuesday.

This is substantiated by Nico Rosberg, who has strong ties at Mercedes, and claims Russell penned his contract following the conclusion of the Dutch Grand Prix.

“By the way on George Russell, I’ve got a rumour,” Rosberg said on Sky Sports F1.

“A certain streaming service was called into the office of Toto to film the signatures.

“That’s the rumour that is circulating in the paddock.”

That leaves a big question mark over where Bottas will end up next season.

There have been strong rumours suggesting that Mercedes and Williams will do a straight swap of their drivers, especially as Bottas has previously driven for Williams.

However, CANAL+ claims that the Finn will replace Kimi Raikkonen at Alfa Romeo – and they reckon an announcement will come on Monday.

Alfa Romeo driver Antonio Giovinazzi is also out of contract at the end of the season so it is unclear who will partner Bottas next term.

For the vacant Williams seat, Nyck de Vries and Alexander Albon are the leading candidates.

Speaking ahead of the Dutch Grand Prix, Hamilton gave a raving review of Russell’s potential.

“I honestly think it will be good,” said Hamilton. “I think George is an incredibly talented driver, clearly.

“I would say probably the only highlight from last week [at Spa] was his qualifying lap, it was amazing.

“I think he’s humble, I think he’s got a great approach, naturally being British I would imagine probably helps, in terms of communication.

“He’s the future. He’s one of the members of the future of the sport.

“I think he’s already shown incredible driving so far, and I’m sure he’s going to continue to grow, so where better to do it than in a great team like this, or whatever team he goes to?”