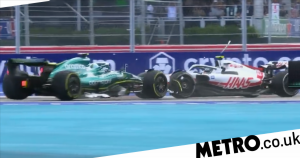 Sebastian Vettel and Mick Schumacher were left seething with each other after the pair collided during the closing stages of the Miami Grand Prix.

In the final few laps of the race, Vettel and Schumacher were scrapping for the last few points positions when they came together at turn one.

Vettel’s Aston Martin was spun around and forced to retire soon after, while Schumacher managed to nurse his Haas to the chequered flag but came home last of the finishers in 15th after pitting for a new front wing.

But the two were not best pleased with each other in the immediate aftermath of the crash, with Vettel saying over the team radio: ‘Which gap was that!? Well, that’s it I guess. F**k!’

Schumacher retaliated though saying, ‘Man, I mean he just claimed my corner!’

The stewards decided that no further action was needed after the incident.

It was not the only time in the race when an Aston Martin and a Haas came together, with Lance Stroll and Kevin Magnussen also making contact on the last lap.

It is a bitter blow for both drivers with Schumacher missing out on his first ever points in Formula 1, while Vettel only has four points this season.

Leclerc still leads the drivers’ standings, but Verstappen has now closed the gap between them to 19 points, while Red Bull are now just six points behind Ferrari in the constructors’ table. 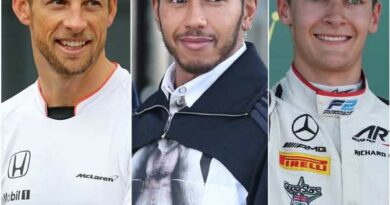