Six-times formula 1 champion Lewis Hamilton has appeared to open the door for a possible future move to Ferrari when he refused to deny meeting with its chairman John Elkann.

Italian newspaper La Gazzetta dello Sport reported on Saturday that the Mercedes driver has met Elkann twice this year, and that they discussed Hamilton potentially replacing Sebastian Vettel at Ferrari from 2021 onward. 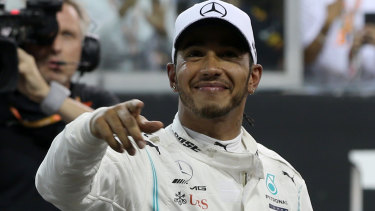 Lewis Hamilton of Great Britain and Mercedes celebrates in parc ferme at the Yas Marina Circuit in Abu Dhabi.Credit:Getty

Ferrari's team principal Mattia Binotto called Hamilton "an outstanding driver" on Friday and tantalisingly added "knowing that he's available in 2021 can make us only happy".

"I think it's the first compliment I've had from Ferrari in 13 years … Thank you. I'll take it," Hamilton said on Saturday after clinching a record-extending 88th pole position.

The 34-year-old British driver added: "[Ferrari is] a team I've always appreciated. To earn the respect from them is obviously very high up."

Wolff was asked after Sunday's race how he rates Hamilton's chances of staying.

British Formula One legend Moss dies at 90 after long illness

How Eric DeCosta, SN’s NFL Executive of the Year for 2019, built Lamar Jackson, Ravens into Super Bowl contenders
We and our partners use cookies on this site to improve our service, perform analytics, personalize advertising, measure advertising performance, and remember website preferences.Ok