Home » Racing » ‘I was first at his side and wanted to be the last to leave’: Price

Harad: An emotional Toby Price has detailed the horrific scene he encountered following the crash that claimed the life of Dakar Rally veteran Paulo Goncalves on Sunday's seventh stage.

The Australian defending motorcycle champion returned to action for Tuesday’s ninth stage after the bikers sat out on Monday to honour Goncalves, who died following a fall in his 13th running of the gruelling event. 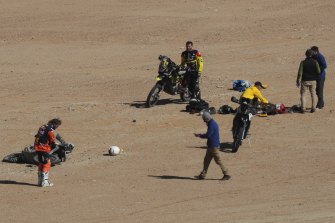 Australian Toby Price (left) at the scene of the Dakar Rally crash which claimed the life of fellow motorbike rider Paulo Goncalves.Credit:AP

Price, who finished second on the 410-kilometre special stage from Wadi Al Dawasir to Harad, was the first on the scene to help the stricken Portuguese.

The New South Welshman admitted he's been deeply affected by the death of popular 40-year-old, and said he finished Sunday's stage "dehydrated with tears".

Price had the lost time restored at the finish – as was the case with Goncalves in 2017 after he stopped to tend to him when he crashed and broke his leg.

"No doubt this is going to be one of the toughest stages we're all going to have to tackle and not because of the terrain or navigation," Price posted on Instagram before Tuesday's start, with a heart emoji.

Price also explained how he came over a crest and saw Goncalves down ahead of him on the sand dunes.

"Worst fears kicked in cause I knew this one was serious," Price said.

"I called for help ASAP and helped get him on his side."

Price was quickly joined by Slovak rider Stefan Svitko and retired French Alpine skier Luc Alphand, who was on the first helicopter to land.

"We were helping holding drip bags, getting bags of medical equipment and guiding other riders around a bad scene.

"We all worked as long as we could but there was nothing we could do," continued Price.

"I helped assist carrying him to the helicopter as it was the right thing to do. I was first at his side and wanted to be the last to leave."

Price is third overall, 26 minutes off the lead.

In the rally car part of the race, Carlos Sainz's lead was slashed for a second straight day and reduced to 24 seconds.

Sainz was powering away from title rivals Nasser Al-Attiyah and Stephane Peterhansel when he made a navigation error and was left behind.

The Spaniard conceded five minutes at the time then lost tread on a tyre and eventually finished six-and-a-half minutes behind Peterhansel, who earned a rally-leading third stage win.