Drivers don't usually get a rousing round of applause before a race has even begun in Formula One. 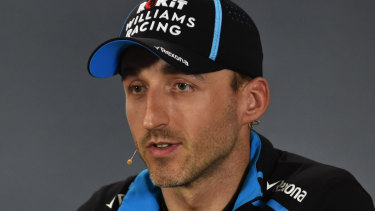 Polish driver Robert Kubica, who is back in F1 after a life-threatening crash.Credit:AAP

Eight years after suffering a horror crash that partially severed his right arm, the 34-year-old will launch his F1 return in this weekend's season opening Australian Grand Prix.

At first Kubica looked like the odd man out when he sat down for a pre-race press conference alongside F1 superstars Lewis Hamilton, Sebastian Vettel, Max Verstappen and local hope Daniel Ricciardo in Melbourne.

He is the new driver for Williams, which finished dead last in the constructors' championship last year.

But the Pole was soon the centre of attention when Ricciardo led an impromptu round of applause from media and the leading drivers to salute the veteran ahead of his stirring return.

"I don't think we all know the extent of what he has been through to get back here – I think it is awesome to have him back," Ricciardo said of Kubica, who had 76 grand prix starts before disaster struck.

"It's a testament to his character."

Kubica – the 2008 Canadian Grand Prix winner for Sauber – was a leading F1 driver back in 2011 when he suffered a crash competing in the world rally championship that many feared would end his career.

He underwent a seven-hour operation performed by seven doctors working in two teams to save his arm.

Despite extensive rehabilitation and more surgery, Kubica still can't grip a steering wheel with his right hand because his fingers can't fully close. 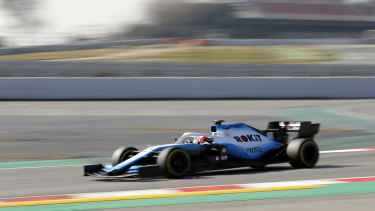 Kubica in action for Williams during F1 pre-season testing.Credit:AP

Yet Kubica fought his way back to earn a seat at Williams who have had to customise his car set-up to cater for his "limitations".

If he was emotional about his return, the stoic Pole gave little away ahead of the season opener.

"It has been a long time away from the sport. Not really a lot of time to think about the emotions," he said.

"You are focused on the job and learn as much as you can about the new F1 and trying to be ready."

He did drop his guard when asked about the new F1 rule which awards a bonus point for the fastest lap in each grand prix but only if the driver finishes in the top 10.

"Unfortunately it doesn't affect us, at least for now," Kubica smiled.

Williams are already behind the eight ball for 2019 after arriving at recent testing almost three days late due to production dramas.