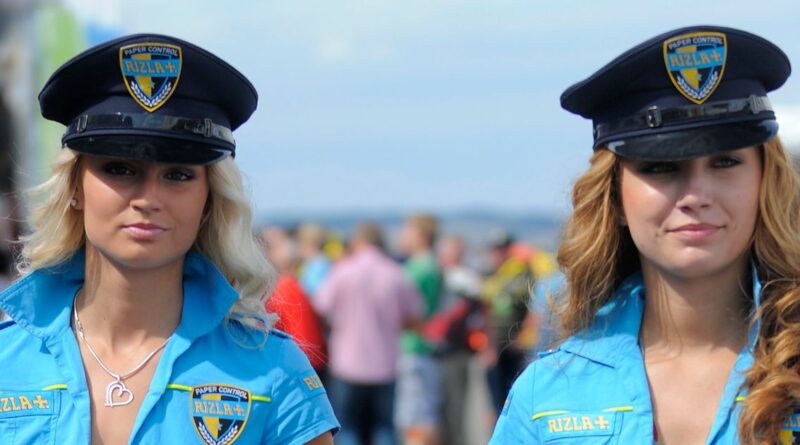 A number of MotoGP grid girls took the law into their own hands – by dressing up as policewomen.

Gorgeous grid girls have been asked to wear all sorts of weird and wonderful outfits over the years, from Playboy bunny ears to a Superman top. But it's difficult to beat the policewomen outfits that some donned during the 2010 and 2011 seasons.

The lucky (is that right?) models posed in the get-ups at several Grands Prix, including Malaysia, Germany and the United States. In one of the snaps from just over a decade ago, two of the women can be seen walking through the paddock.

Each wearing a tight, light blue dress, black leather boots and a hat in the style of a policewoman, the pair also carried on them a truncheon and a pair of handcuffs to complete the look.

The costume was part of a promotion by the Rizla Suzuki MotoGP team. Unfortunately it didn't do the team much good out on the track as they finished the 2010 season bottom of the constructors' championship on 108 points.

Do you think F1 should bring back grid girls? Let us know your thoughts in the comments section below

Although F1 dispensed with grid girls in 2018, 'umbrella girls' remain a part of MotoGP. F1 managing director of commercial operations Sean Bratches explained four years ago why the sport had decided to stop using grid girls.

He said: "Over the last year, we have looked at a number of areas which we felt needed updating so as to be more in tune with our vision for this great sport.

"While the practice of employing grid girls has been a staple of Formula 1 Grands Prix for decades, we feel this custom does not resonate with our brand values and clearly is at odds with modern-day societal norms.

"We don’t believe the practice is appropriate or relevant to Formula 1 and its fans, old and new, across the world."