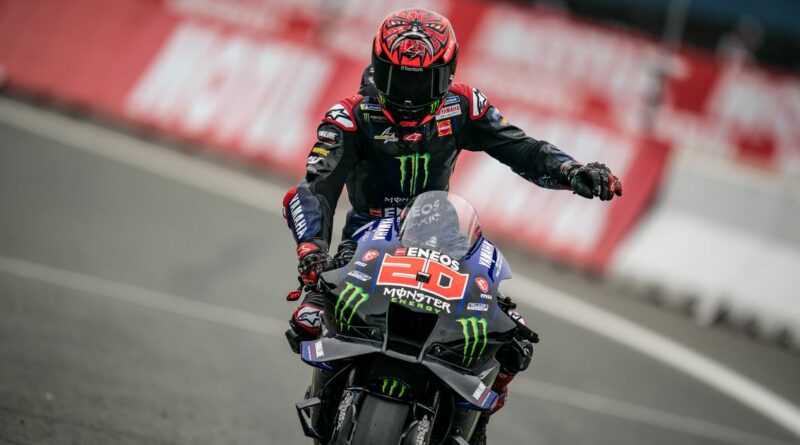 That’s according BT Sport presenters Neil Hodgson and Suzi Perry, who reckon the Frenchman is still capable of becoming a dominant force in the sport. But with the championship battle hotting up this year, Quartararo had a torrid time in Assen.

In lap 5, the reigning champion fumbled a pass on Aleix Espargaro for second place and the front of his Yamaha clattered into the Aprillia. Espargaro went on to set the fastest lap of the race during a stunning charge through the field and finished fourth.

Quartararo, meanwhile, endured a second accident – a nasty high side – and retired for the first time this season. However, he still sits top of the pile – albeit now just 21 points clear of Espargaro.

Quartararo bagged his first MotoGP title last term, having finished 5th overall in 2019 and 8th in 2020. And in contrast to Marquez and Rossi, the 24-year-old was never a standout performer in the Moto2 ranks.

But since making the step up to the premier class just three years ago, Quartararo has made huge strides. Ex-Ducati ace turned pundit Hodgson reckons there’s even more to come.

“I do think he can go up a level and that's what is impressive about him,” he said. “When you see him in and around the paddock, he's happy in his own skin, has a good relationship with the team and never seems stressed.

“You can tell he enjoys being the main man in the paddock, but he's not cocky – he's completely normal and credit to him.”

Perry, who has been covering MotoGP for BT Sport since 2016, agrees that Quartararo is something special. And she believes the Yamaha star brings something different to the table after Rossi retired from MotoGP last year.

“There's a massive star emerging here,” Perry explained. “He transcends the sport in a different way. He isn't the new Rossi, it doesn't work like that. Someone like Rossi comes along every 30 years.

“But you've got a silent assassin in Fabio. He's a genuinely lovely human being who always has time to say hello and chat. It's a new breed of sports star for MotoGP. He can mix with footballers like Neymar and Kylian Mbappe, but take it all in his stride.”

Franco Morbidelli and Andrea Dovizioso are both riding factory spec Yamaha M1s, but have struggled to be competitive at any point during this campaign.

Perry reckons Quartararo’s ability to tame a challenging bike, at least most of the time, is giving him an edge over the more experienced stars.

“He's a fast motorcycle rider, who is a magician,” she added. “I think that's what has set him apart from other riders who have been trying to get to grips with this Yamaha.

“There's is nothing wrong with Morbidelli or Dovizioso – it wasn't long ago that they were both getting podiums all the time – but Fabio is usually getting every last percentage out of that bike.”

Quartararo’s rise has coincided with a difficult time for Honda hero Marquez. The Spaniard has been riddled with serious injuries in recent years and is currently out of action following a fourth surgery on his problematic right humerus.

A run of arm operations followed major surgery on each of his shoulders, at the end of 2018 and then 2019, plus two rounds of recovery from double-vision issues, in October 2021 and March 2022. And, given the delicate nature of his arm, it's thought he could be out of action until the New Year.

Speaking earlier this month, Marquez said: "My arm is immobilised and it will be like this for the next few weeks.

"My feelings so far are positive because I have no pain, which is very important. It allows me to rest and follow the rules of the doctors: a healthy diet, drink a lot and go for walks with our dogs, because it is important that the body is not inactive.

"The most important thing the doctors tell me is that now I have to be calm and patient."

Hodgson, who hung up his MotoGP leathers in 2004, says he’d love to see a fully fit Marquez battling it out with Quartararo. But the 48-year-old has urged the crocked star to think carefully about his health.

“It's been painful to watch as I'm a massive Marquez fan,” he said. “Most ex racers watch Marc and marvel at his talent. But there's more pictures of him doing rehab and another operation. He just wants to win, though, and he'd rather die trying. You think he'd be like: 'I've had enough' but he's still not done.

“I would love Marquez at his best against Fabio, but I can't see him ever being as good as he was. Even if this operation is 100% a success, he's still got this diplopia issue hanging around and that nerve at the back of his eye is fragile. And, as we know, the way he rides mean he's prone to crashing and there will be some big ones.

“If it was my son I'd be begging him to stop. ‘Enough is enough’ – I'd have definitely said that. He's an eight-time world champion and has more money than he ever needs to spend. He's so brave, but might need saving from himself.”

BT Sport is the home of MotoGP. Catch all the action from Silverstone live on BT Sport on August 7. For more info go to bt.com/sport/motogp 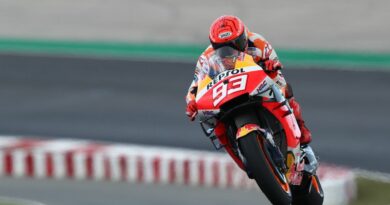