Rossi and Yamaha teammate Maverick Vinales were rounding Turn Three when they narrowly avoided being hit by the bikes of Johann Zarco and Franco Morbidelli, who collided at close to 200mph as they approached the heavy braking zone.

Neither Yamaha man could see what was coming as the incident happened more than 100 yards before the apex of the corner where they were located, and miraculously the cartwheeling bikes missed Rossi and Vinales, with one somehow slicing between them through a gap of barely a bike-length, while the other bounced up and over the nine-time world champion.

“Everyone has to pray to whoever they pray to today,” said a visibly shaken Rossi afterwards. 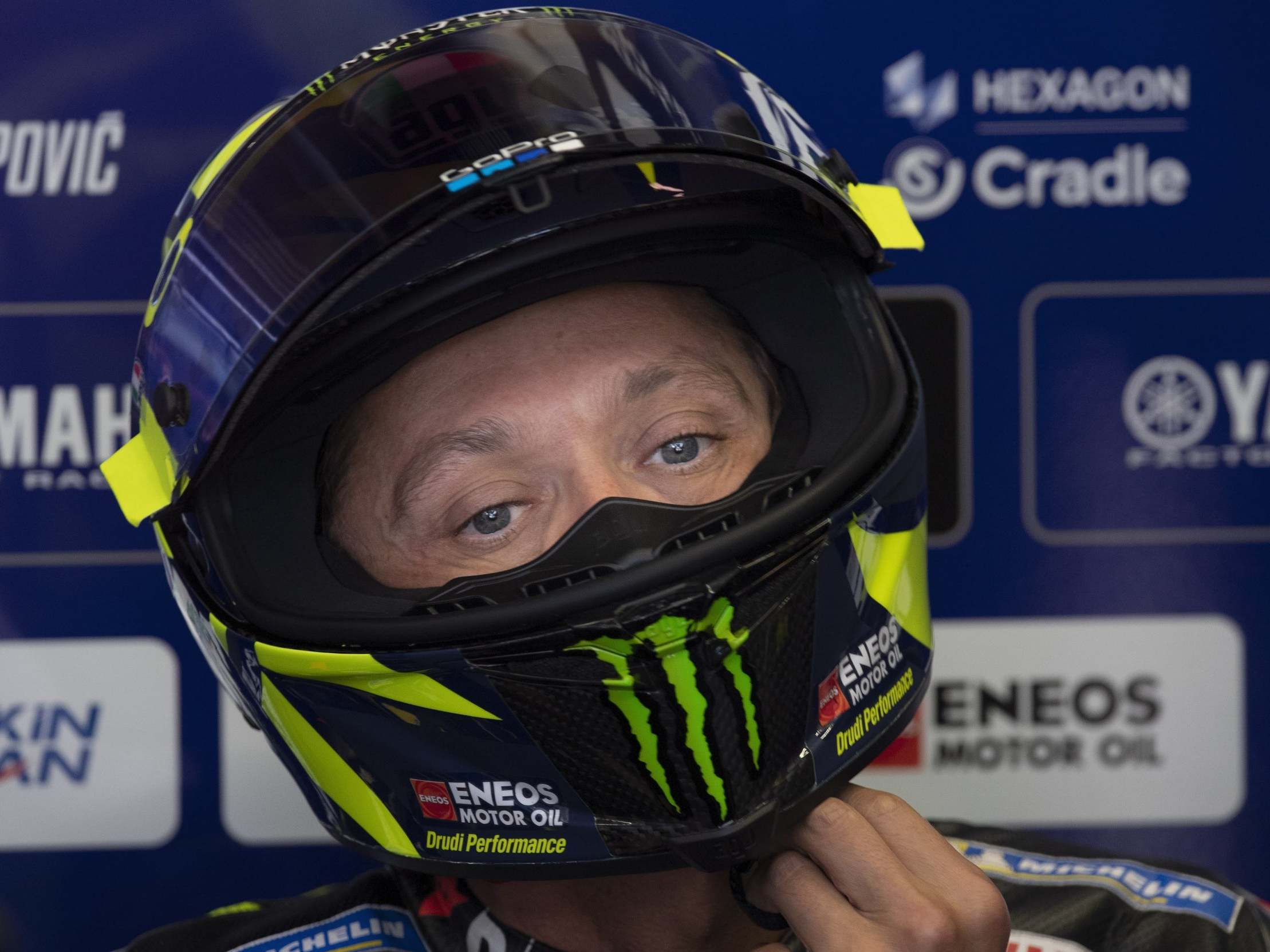 Rossi looked shaken in his pit box after the race was red flagged due to the incident, yet incredibly neither Zarco nor Morbidelli were seriously injured and both were able to walk away relatively unscathed.

After passing Morbidelli through the Turn Two kink, Zarco drifted out wide and in front of Morbidelli, whose front wheel made violent contact with the rear wheel of the Avintia Ducati and sent the pair off the track, with the Yamaha cartwheeling in front of Rossi while the Ducati speared into the air-bag barrier before missing Vinales by inches.

“I have seen Morbidelli also and we were both sorry about what’s happened. It was a racing incident that is sometimes difficult to avoid at this speed. Also, our bikes didn’t touch anyone, so very lucky today.

“All is fine, just need to analyse everything well and work for next week. I will be fit to race. Thank you for all your support.”

Watch the video of the crash below…

Morbidelli received treatment at trackside before walking to an ambulance where he was taken to the medical centre for further assessment, although it was confirmed that he did not lose consciousness and had not suffered a serious injury.

A SIC Racing statement read: “Franco is okay. His right hand, right shoulder and head took the brunt of his crash but he did not lose consciousness at any point.

“He has undergone a CT scan, which showed that there are no major issues. Franco is currently in the Clinica Mobile undergoing minor treatments.”

The race restarted soon after the incident was cleared in a 20lap sprint, which was eventually won by Ducati’s Andrea Dovizioso – just one day on from the Italian announcing that he will leave the team at the end of the year. Suzuki’s Alex Rins looked to be heading to the front with 10 laps to go, only to crash out as he made his move to the front, while early leader Pol Espargaro also fell off following a collision with Miguel Oliveira.

The high rate of attrition allowed Dovizioso to maintain Ducati’s 100 per cent record at the Red Bull Ring since it returned to the calendar five years ago, and he was firmly of the opinion that he had no answer for Rins had he not crashed out of the lead.

“(It was a ) very, very strange (race) for many reasons. To start twice was strange,” Dovizioso said. “It was not that easy to start the ‘second race’ with perfect energy but I was able to manage the race because I had a few corners where I was able to be a bit faster. I was so strong in braking and could decide the pace.

“If Rins didn’t crash, I think it would have been very difficult to beat him.”

The second Suzuki of Joan Mir managed to pass Premac Ducati’s Jack Miller through the final corner to take second, ahead of the Australian who came home third. Rossi trailed KTM’s Brad Binder in fifth position, while Britain’s Cal Crutchlow came home 16th for LCR Honda one place ahead of Aprilia’s Bradley Smith.

‘We’d like to see him further up the grid’: Pressure mounting on Ricciardo as McLaren extend O’Ward deal