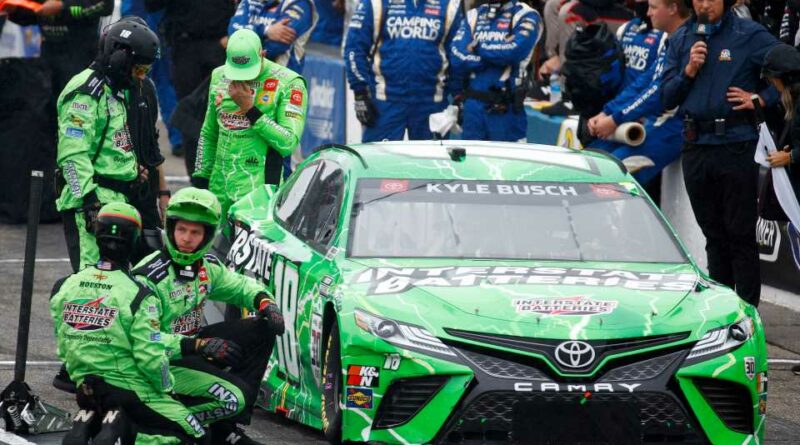 Officially, Kyle Busch’s day ended after he crashed on Lap 3 of the Foxwoods Resort Casino 301 on Sunday. In actuality, it likely ended before the green flag waved at the New Hampshire Motor Speedway.

NASCAR officials decided to allow racers onto the track for Sunday’s race, the fifth-last of the regular season, despite the fact that mist was falling on the track. The rain picked up as the race began, with drivers and pit crews communicating to NASCAR that racing conditions weren’t optimal.

It all came to a head in Turn 1 of Lap 3: Busch, coming off a runner-up finish in Atlanta last week, lost traction heading into the turn, spinning out into the wall. Martin Truex Jr.’s car also suffered damage. Denny Hamlin, Ross Chastain and Alex Bowman were involved in the crash, too, but their cars did not suffer significant damage.

The damage to the 18 car was significant enough for Busch’s day to end. He was clearly frustrated, and he let it show on the track as he tailgated the NASCAR pace car and then pushed it as he made his way to pit road.

NASCAR declined to let Busch run in his backup car after the crash. Regardless, cameras caught the driver standing over his wrecked car in the aftermath, saying he wasn’t “going to f—ing stick around until tomorrow for this s—.”

Busch continued to blast NASCAR on the NBC Sports Network telecast, or at least as much as he could without incurring fines. Regardless, he reiterated that drivers should never have been allowed on the track and that his car was finished:

“It never should have gone green to begin with,” Busch said. “We’d been talking about it for two laps it was raining. We’re done. There’s no fixing that thing.”

As for why NASCAR decided to let drivers onto the track, it’s possible officials wanted to get through at least half of the race before sunset (there are no lights at the New Hampshire Motor Speedway). Local radar showed mostly clear skies, but the brief deluge was enough to impact the race.