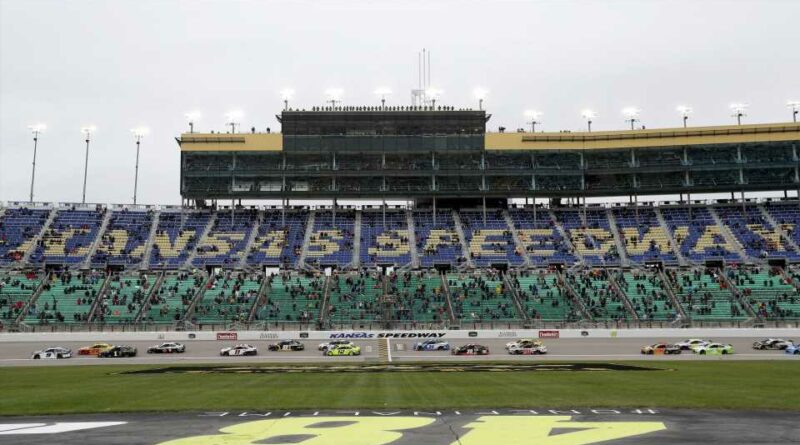 The starting lineup for Sunday’s NASCAR Cup Series playoff race at Kansas Speedway was set by applying the statistical formula NASCAR is using for the majority of Cup races in 2021.

Drivers’ starting positions for the Hollywood Casino 400, the second race in the Round of 8 and the eighth race of the 2021 Cup Series playoffs (3 p.m. ET; NBCSN, TSN, MRN, SiriusXM NASCAR Radio), were based on four factors:

NASCAR is conducting qualifying for just eight of the 36 Cup Series points-paying races in the 2021 season. Seven of those races have already been run; the one remaining race with qualifying is the season-ending Championship 4 race at Phoenix Raceway on Nov. 7. NASCAR cut back on qualifying to limit time spent at the track and reduce costs amid the COVID-19 pandemic.

Below is the starting lineup, which was set without qualifying, for Sunday’s NASCAR Cup Series playoff race on Kansas Speedway’s 1.5-mile oval.

Who won the pole for the NASCAR race at Kansas?

Kyle Larson was awarded the pole for Sunday’s playoff race based on NASCAR’s formula. The Hendrick Motorsports driver is coming off a win in the Round of 8 opening race at Texas Motor Speedway on Oct. 17. The victory was his eighth of the season and his third of the playoffs. He has won in each of the first three rounds.

More importantly, the win automatically qualified him for the Championship 4 race. Larson will compete for the Cup Series championship on Nov. 7 at Phoenix Raceway.

Ryan Blaney, who is second in the playoff standings, will start second on on Sunday. The Team Penske driver finished sixth at Texas in the opening Round of 8 race.

Kyle Larson is atop the standings but is already in the Championship 4 thanks to his win at Texas. That leaves three open spots and just two more races in the Round of 8. Ryan Blaney is second, followed by Joe Gibbs Racing teammates Denny Hamlin and Kyle Busch.

Defending series champion Chase Elliott is the first driver out heading into Sunday. He trails Busch by eight points and Hamlin by nine.

A playoff driver who wins a race in the Round of 8 automatically qualifies for the Championship 4 race Nov. 7 at Phoenix Raceway.

NASCAR used a mathematical formula to set the starting lineup for Sunday’s playoff race at Kansas Speedway, the Hollywood Casino 400. Forty cars were entered, which gives the race a full field. Playoff drivers are denoted by a “P” next to their names.

Per NASCAR’s playoff rules, the top eight spots in the field went to the eight remaining playoff drivers, but the starting order was based on the mathematical formula NASCAR has used for the majority of its races this season.

Kyle Busch’s response to crew after costly penalty is hilarious

What time does the NASCAR race start today? TV schedule, channel for 2021 Championship 4 at Phoenix