The Daytona 500 is the one constant as NASCAR enters another era of change. The biggest Cup Series race of the season remains the first despite an altered race schedule for 2020, and while next year will bring even more schedule changes along with the introduction of the “Next Gen” car, the one sure bet is the Daytona 500’s place as the season-opener and the most notable race of the year.

This year’s Daytona 500, the 62nd running of The Great American Race, is scheduled for Sunday, Feb. 16 with a start time of 2:30 p.m. ET. As has been the case for 13 consecutive years, the Daytona 500 will broadcast live on Fox.

The first race of the 2020 NASCAR Cup Series season represents the beginning of the end for the “Generation 6” cars before the aforementioned “Next Gen” cars are introduced next year. It also marks the first race of seven-time champion Jimmie Johnson’s last season in the driver’s seat, as the Hendrick Motorsports legend announced in November he will retire after 2020. The two-time Daytona 500 winner has one more chance to earn a record sixth Cup Series championship.

Below is all you need to know to watch the 2020 Daytona 500 on Fox, the network’s 17th presentation of NASCAR’s most prestigious race.

The start time for the Daytona 500 is 2:30 p.m. ET, but Fox’s prerace coverage will begin long before the green flag at the 2.5-mile Daytona International Speedway is waved. (The official green flag time is TBD.)

On the call of the 2020 Daytona 500 will be Mike Joy and Jeff Gordon, marking the first race the duo has worked together since longtime Fox NASCAR analyst Darrell Waltrip retired. Joy will call his 41st Daytona 500, and Gordon will call his fifth.

The actual Daytona 500 is the finale to what’s an unusually lengthy series of practice and qualifying sessions, all of which will be broadcasted by Fox. Such a big race deserves such extensive coverage.

The on-track action begins Saturday, Feb. 8 with three practice sessions, the first of which is a warm-up for Sunday night’s Busch Clash. FS1 will carry the majority of Daytona 500 practice and qualifying sessions; the only events on Fox are Sunday afternoon’s (Feb. 9) pole qualifying session and the race itself on the 16th.

Below is the full TV schedule for all Daytona 500 practice sessions, qualifying events and races, including the annual exhibition. All events being shown on FS1 or Fox can be streamed live on Fox Sports Go.

A special race calls for a unique qualifying format. Though qualifying for the Daytona 500 will take place Sunday, Feb. 9 at 12:30 p.m. ET, that event will only set the front row for The Great American Race. The rest of the field will be set during the Bluegreen Vacations Duels, a pair of quick races scheduled for 7 p.m. ET and 8:45 p.m. ET on Thursday, Feb. 13.

Only 40 cars will compete in the Daytona 500, so three of the 43 cars that have entered the race will not qualify. Below is the full entry list.

According to NASCAR, three drivers enter the 2020 Daytona 500 tied with the best odds to win. Team Penske’s Joey Logano and Brad Keselowski, plus Hendrick Motorsports’ Chase Elliott and Joe Gibbs Racing’s Denny Hamlin, are tied atop the board with 10-1 odds. Hamlin, of course, won last year’s Daytona 500.

NASCAR will do ‘everything in our power’ to run full schedule in 2020, Steve Phelps says 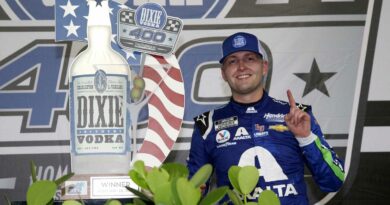