The two-time bike category winner, was forced to stop after 425km of Friday's leg, costing him around eight minutes on the day. 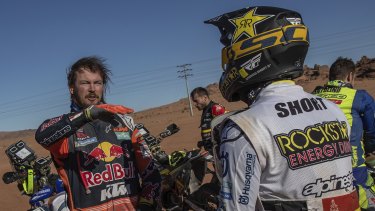 Toby Price, left, talks with American Andrew Short, who lent him a wheel to continue the sixth stage of the Dakar Rally.Credit:AP

But he revealed afterwards he was at least able to finish the stage after borrowing a wheel from American rider Andrew Short.

"Today's stage started out really good, we were navigating really well from the front … I was quite happy with the way I was racing," Price tweeted after the race.

"But unfortunately around the 400km mark my rear tyre fell off! I have no idea why this would have happened."

Price wrote he was "super grateful" to Rockstar Energy Husqvarna rider Short, who "gave me his wheel which allowed me to get to the finish as quick as possible".

He added: 'Thank you again for this mate!"

It was Brabec's second stage win in and he enters the halfway point with a 21-minute advantage over Pablo Quintanilla (Husqvarna) in the general classification, the Chilean finishing fourth to scale up to second place overall.

Stephane Peterhansel won the sixth stage of the car category with Spaniard Carlos Sainz stretching his overall lead to almost eight minutes after finishing ahead of Toyota's defending champion Nasser al-Attiyah by seven minutes and 48 seconds.

‘I was first at his side and wanted to be the last to leave’: Price