Daniel Ricciardo has qualified fourth fastest for the Canadian Grand Prix, his best performance for Renault, in a huge boost for the Australian star's flagging season.

Sebastian Vettel put Ferrari on pole for the second consecutive year on Saturday, snatching top spot from Mercedes' defending Formula One world champion Lewis Hamilton at the death with a breathtaking lap. 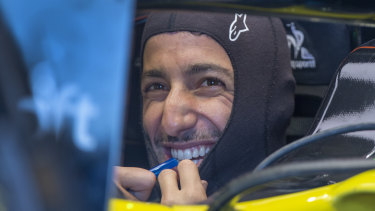 Daniel Ricciardo was thrilled to clinch fourth spot on the grid.Credit:Canadian Press

Vettel's teammate Charles Leclerc will start third, while Ricciardo's fantastic lap put him alongside the Frenchman for the start of Sunday's race.

"I never thought I'd be so happy for a fourth place in qualifying; it feels like a pole position," Ricciardo told renaultsport.com.

"It was so cool when they told me over the radio I was fourth. I'm really happy for the team today."

It's the first time since Japan 2010 that a Renault has started on the second row of the grid.

"We'll see about tomorrow, the start could be interesting.

"For now, we'll enjoy this moment as a fourth in qualifying is huge for us."

Renault have struggled to keep pace in 2019 but Ricciardo's effort and a seventh-place qualification for teammate Nico Hulkenberg were warmly greeted.

"It's a great qualifying result and a great effort from both drivers," Renault's sporting director Alan Permane said.

Vettel, who won from pole position last year in Canada, will be hoping for the same on Sunday, with world championship leader Hamilton chasing a record equalling seventh win in Montreal.

It was the German's first pole in 17 races and 56th of his career.

"Very, very happy for the team. The last few weeks have been tough for us. The car felt good. I hope we can carry that into the race," Vettel said.

Mercedes have swept all six races this season, five in a one-two formation.

"I think we gave it everything today, so I'm not disappointed," Hamilton said.

"Overall, I'm happy with the job we've done and it leaves us in a good position for the race."

Red Bull's Pierre Gasly grabbed fifth on the grid and will start alongside the Mercedes of Valtteri Bottas, who could do no better than sixth after an early spin in the final session sent the Finn to the pits.