Emotion coursed through the Hungaroring paddock as Mick Schumacher, his overalls emblazoned with a "Keep Fighting Michael" message in honour of his father, grasped his maiden victory in Formula Two.

So much about the 20-year-old is redolent of his seven-time world champion parent: the striking red overalls, the pronounced jawline, the clenched fist of celebration. 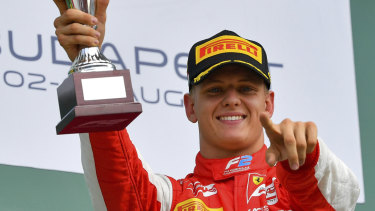 With Michael still confined to his Geneva home after the ski accident that ruined his life, it was little wonder that Mick's first thought was of toasting the win with his family.

Ever since Schumacher jnr first decided to follow his father into motorsport, he has shouldered an almost intolerable burden of expectation.

Every question, every analysis of his talents is set against the vast body of work bequeathed by Michael. Can he carry the flame? Could he one day be sitting behind the wheel of a Ferrari in F1?

All that mattered here was that he done justice to his abilities. Earlier this year, when he performed test drives for Ferrari and Alfa-Romeo, there was restless talk that he could graduate to the sport's highest level as early as 2020. His subsequent struggles in F2, though, have cooled such predictions.

"I think only time can tell," he reflected. "Having the first victory in F2 is a great thing, but I still need to work a lot on myself.

"Whether I get into F1 next year or in two or three years' time, I don't know.

"I will do my best to learn as much as possible, so that when I do make the step up, I'm ready and I feel comfortable in an F1 team."

Throughout his formative years, Schumacher has been scrupulously shielded from the spotlight.

When he first competed in karting, he raced under his mother's maiden name, Betsch, to deflect any unwanted hype. 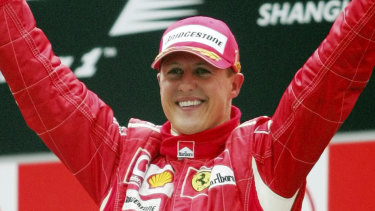 Even as his profile rises, that policy remains in place. Kehm, who was also the spokeswoman for Michael, guards Mick's privacy ferociously, in keeping with the code of omerta that surrounds his father's condition.

Since his father struck his head on a rock in an off-piste area of Meribel in December 2013, family members have not provided any substantive updates on his health.

For Mick, the magnitude of a victory in Hungary, where Michael was so consistently successful, could hardly be exaggerated.

"It is very special," he said. "I'm also thinking back to last year, when I won for the first time in Formula Three at Spa, where my dad was also very comfortable."

Schumacher took the F3 title last year, and has since become a member of Ferrari's driver academy.

The adaptations to F2 have so far proved more difficult, but there are growing signs that he is finding his range. He fended off Matsushita with aplomb, despite the Japanese driver lurking within striking distance for the majority of the race.

Even with this win, Schumacher lies a distant 11th in the F2 standings, with Holland's Nyck de Vries leading the championship by 30 points after 16 races.

Schumacher's previous highest finish was a fourth place in Austria, and his mentors have since advised that he would benefit from a second season at this level, rather than being prematurely thrust into the relentless scrutiny that would surely come in F1.

All that counted here, however, was the poignancy of seeing a Schumacher as a winner once more.