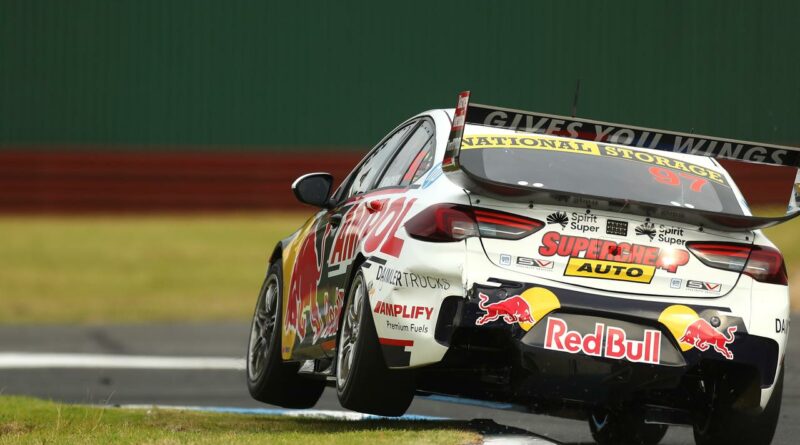 Shane van Gisbergen has backed up from his incredible win in the opening race at Sandown to claim a pair of pole positions in the wet for the first of two Supercars sprint races.

After producing an amazing comeback just two weeks after surgery on a broken collarbone to win from 17th place on the grid on Saturday, van Gisbergen claimed his second and third poles of the year in slippery conditions at the Melbourne track.

It was a front row lock-out for Triple Eight for both of today’s 36-lap races with seven-time Supercars champion Jamie Whincup twice qualifying second behind his teammate.

“It was awesome to drive, I could tell following these guys out we had plenty of grip and Jamie was on me as well and just learning the lines and trying to find the train tracks,” van Gisbergen said.

“The car was awesome in both sessions.”

Van Gisbergen survived a scary moment in the first qualifying session when he slid off the track at turn three after skidding on the kerb.

SVG flies to the top!#RepcoSCpic.twitter.com/WKboGBbvBv

But the Supercars championship leader was able to reverse the car out of trouble to avoid triggering a red flag.

“I had a big spin but I was just panicking trying to get going to not cause the red flag and lose the best lap,” van Gisbergen said.

“The car was really good but it started raining heavier so it wasn’t real fun at the end, so this (next qualifying) session will be wet at the start.”

Dick Johnson Racing’s Will Davison, David Reynolds and Heimgartner completed the top five for the second race this afternoon.

Van Gisbergen admitted the wet conditions were favourable for his collarbone, lessening the load on the injury.

“Normally I don’t like the rain, but today it’s not a bad thing,” van Gisbergen said.

Van Gisbergen said there were no issues with his injured collarbone, which he hurt in a mountain biking accident.

“Hopefully the weather (later) is easier, it’s not one or the other – it’s either rain or dry – and not in between because that’s when it gets tricky.

“But it’s awesome that both our cars are good and thanks to the team here it’s great.”

Van Gisbergen has won the opening three races of the Supercars season and holds a 60-point lead in the championship. 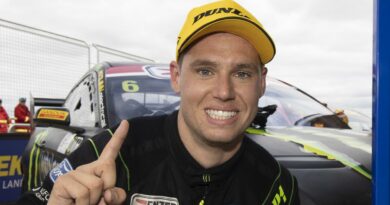