Sebastian Vettel lapped fastest for favourites Ferrari in Friday practice for a Mexican Grand Prix that could crown Lewis Hamilton a six-time Formula One world champion.

The German, himself a four-time champion, lapped the Hermanos Rodriguez circuit with a best effort of one minute 16.607 seconds on an overcast afternoon at Formula One's highest altitude track. 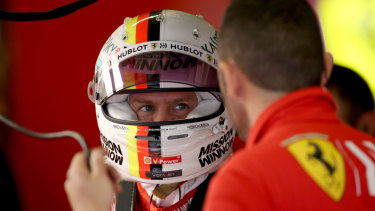 Sebastian Vettel prepares to drive during practice for the F1 Grand Prix of Mexico at Autodromo Hermanos Rodriguez.Credit:Getty

Hamilton had set the pace in the morning for Mercedes, with a lap of 1:17.327, but ended the day only fifth fastest and nearly a second slower than Vettel on a difficult day for the champions.

"Not good enough. We are just lacking performance and power compared to the others," said Mercedes team boss Toto Wolff.

Finnish teammate Valtteri Bottas, the Briton's sole remaining rival with four races to go, was fourth – a situation that would see the championship battle continue to Texas next weekend if repeated in Sunday's race. 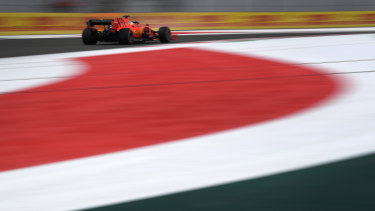 Hamilton has to score 14 points more than Bottas, winner of the previous race in Japan, on Sunday to wrap up the title.

That means finishing on the podium at a circuit that has not favoured him and Mercedes in the past two seasons, despite the Briton securing the title there on each occasion.

Vettel and Leclerc had lapped on the slower, medium tyres in the morning with Hamilton on the fastest softs.

The morning session was halted with around half an hour remaining when Racing Point's Lance Stroll smacked his car into the tyre wall.

There was little real damage and the Canadian was able to return to the track before the end of the session, with the top three setting their fastest times after the red flag interruption.

Red Bull's Alexander Albon, fourth in the morning, spun into the barriers after five laps of the second session.

Ferrari arrived in Mexico as many people's favourites, having racked up five poles in a row, with Red Bull also seen as contenders for another win.

"We’re going to go into this weekend knowing that Ferrari are massively quick usually on the straights and obviously straights are a powerful element of this circuit," Hamilton had told reporters on Thursday.

"So I don’t know when we’ll be getting another pole – unless it rains, which can change everything."