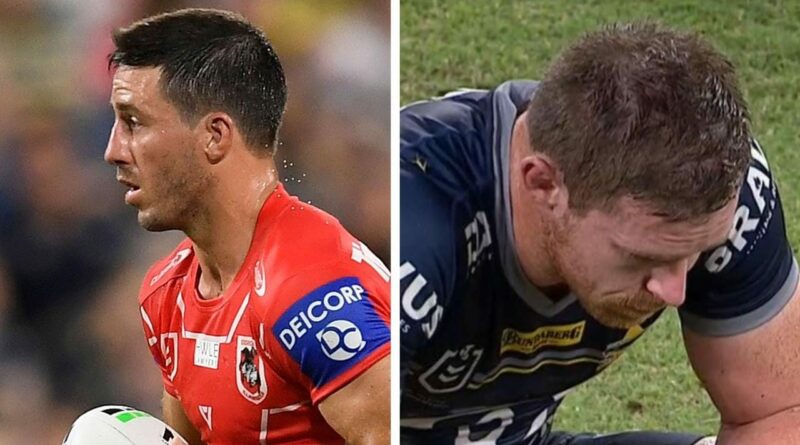 St George Illawarra Dragons halfback and skipper Ben Hunt may finally be comfortable in the Red V, turning in a stunning performance in a 25-18 rollercoaster of a match against the North Queensland Cowboys.

The Cowboys scored first but it was just the start of an incredible battle that the scoreline didn’t do justice.

The Dragons took a 13-6 lead to the break after Corey Norman almost kicked the first two-point field goal, taking two steps over the 40m line.

The scoreline was set in the 60th minute but the Dragons put in an incredible defensive effort to come away with the win in Townsville.

At one stage, the Cowboys forced three successive repeat sets of six and yet the Dragons held the home side at bay.

The combination of Hunt and hooker Andrew McCullough, who reconnected this season after spending nine years at the Broncos together.

For the Cowboys, it was the opposite.

Post match, Cowboys half Michael Morgan was dejected with his head in his hands after the game.

“Sometimes when people play halfback or five-eighth, they try to be someone they’re not, like Johnathan Thurston or Andrew Johns, they should just be themselves,” Cronk said.

Ben Hunt had one of his best games for the Dragons in the win over the Cowboys.Source:News Corp Australia

The pair dominated and Hunt, who has was signed as a halfback but was moved from the bench to hooker last season, looked back to his best.

“This is as good as Ben Hunt’s played (for the Dragons),” Greg Alexander said on Fox League. “I think the captaincy and responsibility will get more out of him. It’ll make him a more consistent player. Without doubt, the best part of his game is his running game. He is such a powerful runner of the footy.”

Maybe the best I've seen Ben Hunt play in the #redv yet. Captaincy looks pretty good on him so far #NRLCowboysDragons

The @NRL_Dragons have their best halfback. The bloke they originally bought to be a halfback. #NRLCowboysDragons

Ben Hunt is starting to earn his money #NRLCowboysDragons

Hunt, who was named skipper of the Dragons under new coach Anthony Griffin, said the new regime had allowed him more freedom.

“It’s been a great pre-season and Hook has put a lot of faith in myself and Corey (Norman),” he said. “He’s really backed us to lead this team around and we’ve had a really big pre-season and we knew we weren’t going to hit the ground running completely clean and we’ll keep building and building. And tonight was another good step.”

The result sees Griffin get his first win after returning to the NRL.

‘I had a little cry’: the moment Melbourne’s larrikin broke down in tears